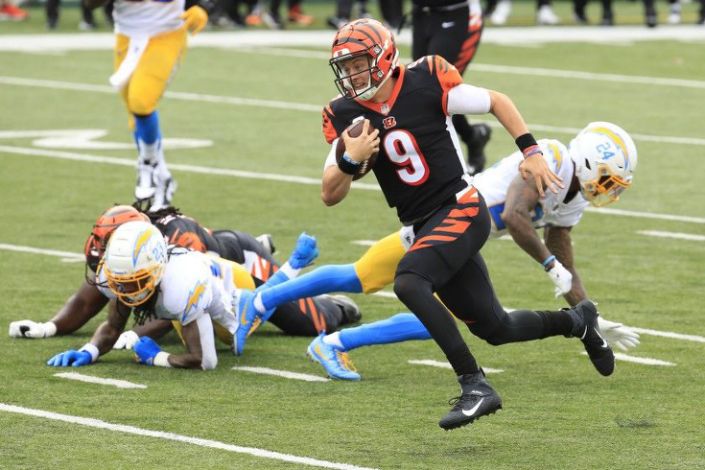 The battle of Ohio kicks off week 2 with a contest between 2 #1 overall picks, and the Bengals, as always get an early Thursday night game to get the need to cover them out of the way for the season. Both these teams come into this at 0-1. The Bengals arguably should have won at the weekend while the Browns got destroyed by the second best team in the league, the Baltimore Ravens.

Let’s start with my Bengals and the baptism of fire that #1 overall pick Joe Burrow received at the hands of his buddy Joey Bosa; the speed of which he was pressured definitely seemed a shock to the system early on, but he adapted quickly and well and the second half performance was very promising for a first game. He will now be aware of the “prowess” of Bobby Hart and the deficiencies of the right tackle position on our offensive line.

I think Burrow has had maybe a little too much praise for his performance, by all means it was decent enough for a rookie but he missed two throws for TDs at the end of the game which would have won it, he shovelled the ball straight into the hands of Melvin Ingram and took a 15 yard sack at one point as well. They were the negatives in my eyes. BUT he led the team down the field at the end of the game for a game-tying field goal which was missed. He gives himself a ‘D’ for his performance which is obviously him being harsh on himself I’d say a solid C+ on balance. Plenty of promise though and I definitely wasn’t disheartened by what I saw.

I’ve said all along he’s got the offensive talent and he looked to have a decent connection with AJ Green who, thankfully, looked healthy and tidy in and out of his breaks. I don’t want to blame him for the OPI which cost them the game-winning TD, but he did straighten his arm and that’s not allowed, it’s annoying as he would probably have made the catch regardless, he finished the game with 5/51 from 9 targets, leading the team in both targets and yards. Burrow spread the ball around well though with 4 players receiving 5 targets each, Boyd, Ross, Uzomah and Bernard. It was thought by quite a few that the slot would be an area Burrow looked for often which would be Boyd and Uzomah’s areas, they caught 4 each and Uzomah was targeted at the back of the endzone on one drive as well. Ross is getting the blame for “letting one through his hands” personally I thought it was a little over-thrown, maybe he should of caught it, I thought that was a little harsh. They gave Auden Tate and Tee Higgins a few snaps too, lining up 5-wide a few times which is something they should do more as it will open up space elsewhere. They’d be sensible to target the middle of the field tonight so I can see Boyd/Uzomah having decent games, Uzomah reception line is 2.5, he’s had 4,5,4 in the last 3 games.

I love Joe Mixon, and I want him to succeed in Cinci, but they need to use him in the passing game, something which I just don’t think will happen. It seemed like Gio Bernard was in on every 3rd down on Sunday and that seemed to be the case last year as well. If they load Mixon up with carries he’ll be great, but if they’re trailing that becomes difficult to do. Mixon had 19 carries on Sunday for 69 (heh) yards.

It’s hard to judge the defense as I don’t think the Chargers offense is really any good but I thought they did a decent enough job even without Geno Atkins who misses again and without DJ Reader for a portion of the game when he went down with “cramp” and DVOA seems to back that up having them ranked 11 overall, 12th vs run, 13th vs the pass in that opener. I’ve said all along the talent is there, so there’s hope yet!

The Browns are getting destroyed by everyone all over twitter for their abject performance against the Ravens. I’d love for them to be terrible again and got a lot of agreement when suggesting that Baker Mayfield might actually be pretty shit. BUT they were playing the Ravens and pretty much everything went wrong for them, they tried a fake punt early in the game which the Scottish Hammer fumbled and gave the ball away. Cleveland actually had more time of possession but couldn’t convert and mistakes really hurt them Baker throwing a pick and Chubb and Hunt losing fumbles on the ground.

Obviously I think Baker is an arrogant prick as highlighted by presenting the ball to Hue Jackson when he was the Bengals OC. That still bugs me. If you’re good on the field then a level of arrogance is fine but he hasn’t backed it up for 17 games now, last year they were the hype team of the off-season they had the “man who made Baker great” as Head coach and… it all fucked up, but of course it wasn’t Bakers fault. Odell Beckham was injured all year, it was the offensive line, the sun was shining weirdly every game, it just wasn’t Bakers fault.

He had a 54 QBR last year, 22 TDs, 21 INTs… and the first game this year, 21 from 39 for 189 yards and a TD. I don’t think he’s terrible but I don’t think he’ll ever live up to his #1 billing and obviously as a Bengal fan I hope he never does. Last year against the Bengals he had 11 and 12 completions 3 TDs, 5 INTs, with 44% completion percentage… NUMBERS. In order of balance he did do well against them in his debut year (from pfref)

He’s got no excuses this year and I think that’s why there was a strong backlash on his performance last week, they’ve improved the offensive line, brought in a new HC and given him more weapons. Odell Beckham doesn’t seem to have any connection with Baker, if they got that sorted then it would be a whole different thing, he had 10 targets at the weekend, catching 3 for 22 yards, apparently only 4 of them were actually catchable. Jarvis Landry has been better in his time there, and it looks like he’ll be playing tonight despite being limited in training this week with a hip injury. Rashard Higgins is the WR3 and has the odd game where he does something.

They lost David Njoku to the IR after he scored in the opener so it looks like Austin Hooper should solidify his role as the main TE in Cleveland after they paid good money for him in the summer and Harrison Bryant will likely get more snaps as the second tight end, the Browns did lead the league in 12 personnel this weekend (2 tight ends) as expected.

They do possess possibly the best RB tandem in the league and I think the plan most weeks would be to run them two into the ground and not allow Baker to do much. Nick Chubb is better on the ground and was second in the league in rushing yards last season. His numbers did take a hit after Kareem Hunt returned from suspension and in week 1 Hunt had 1 more snap on offense than Chubb at the weekend with 6 more touches. I think that was because they were trailing, if they’re leading it should be more Chubb.

The defense was ranked as the 31st in the league, and was particularly terrible against the pass last week. They only recorded one sack which I’m fairly sure they’ll increase tonight. If they’ve got any sense they’ll put Myles Garrett on Bobby Hart all night and leave him to it. The secondary should be better, but they’ve got injuries in the middle of the field.

It’s always hard staying neutral on a Bengals preview, I’m either bias in thinking they’ll win, or subconsciously trying to protect my own sanity by assuming we’ll be terrible, then any result is fine.

A quick note on TNF. Consensus knowledge suggests you fade new QBs, new HCs in their first games on Thursday nights, it’s a weird week for them and experience is important. In general road teams fare badly on Thursdays as well. – None of that really helps in this one… Browns have a new HC, Bengals a 1 year HC and rookie QB and it’s two Ohio teams so the travel isn’t exactly extortionate either.

I honestly think the Browns will win. I think there’s been a massive over-reaction to the opening game. At the same time though I think the Bengals are better than considered by the majority of people who follow the NFL. Basically I think it will be a close game either way. The Bengals love one-score games. I’ll lean to over on the total, but these teams only scored 19 between them in week 1 so, no bet.

Basically I’ll be taking AJ Green until he scores. I can’t say no to over 2/1 for him.

Yes they’re both Bengals bets, but they’re value in my opinion. I don’t mind Burrow scoring again at 6/1, Ross at 5/1 or Harrison Bryant at 8/1 now he’s the TE2. But I’m not going to be tipping them.

Good luck with whatever you’re on tonight. I’ll be up at 1am to watch it… does a beer at that time count as drinking BEFORE work? KIF WE HAVE A CONUNDRUM!

If you’ve not seen, I and a few others are creating a Player Props comparison sheet every week of the season, it’s incredibly useful as you can find the best lines quicker than anywhere else – NFLProps.bet for more information and to sign up. There’s a 6 yard difference in Joe Mixon rush yards for example.

If you’re in the Pigskin Pickem, make your picks.

AND finally… Draftkings for the night