With so many good things coming out of the UK on the NFL, Fantasy and Betting on the game, we would like to help be part of the community and spread the love and the work of people who write about it all, so starting now we’ll be doing some guest spots for anyone who wants to write a little for us or share their work on the site. – Britz in the endzone have a weekly podcast available on all good pod catchers, they’re like the English version of the Around the NFL guys, a bit of knowledge, a bit of banter, a nice easy listen all round, and they’re really getting into their pre-season has gone very well so far, they’re hitting their stride ready for the start of the season. I did a piece on tight ends which is available on their blog – https://britsendzone.com/2017/07/06/334/ if you fancy a read of it.

“Some players are picked because of hype, hunch or projection – however, sometimes their average draft position (ADP) does not fully take into account what they have actually achieved in their fantasy careers.

On the other hand, there are players who have been productive but are often left overlooked. Perhaps they are not the sexy name with the upside of the hot new rookie, but they get things done and their consistency will get you one hand on that fantasy championship (perhaps even the Zing Zing supperbowl).

Why get the overpriced guy in the early rounds, when you can get the value pick several rounds later and stuff that roster full of consistent scorers. This article will take you through the players you should ignore, in order to get an equally productive guy several rounds later.

Amari Cooper is the #1 receiver for the up-and-coming Oakland Raiders, however, fantasy doesn’t care about that. Crabtree scored higher in standard scoring than Cooper in 2016 (by 1 point) and is the main target in the red zone. In each of the last two years, Crabtree has scored 3 more TD’s than Cooper and only had 100 less receiving yards. Even if Cooper reels in 2-3 more

Even if Cooper reels in 2-3 more TDs in 2017, the value of picking up Crabtree in the 5th/6th round compared to Cooper in the 2nd round is too high to turn down.

Ok Ok, so we know that Sanders isn’t going to repeat the 1,400-yard 9TD season he had two years ago with Peyton Manning. However, he has quietly gained over 1,000 yards and 5 TDs over the last two seasons with inconsistent and changing quarterbacks. If you compare this to the 1,000 yards and 4 TDs that Pryor got last year, you must be wondering how there is a 52 player gap between the two players.

Pryor made an incredible and impressive move from QB to WR last year, but produced while being the focal point of the Browns’ offense, getting 140 targets in 2016 (only 77 receptions). Moving over to Washington, he’ll fit into the more specialized Desean Jackson deep role (100 targets last year) as part of a much deeper receiving core.

Looking forward, Pryor’s touchdowns and yards-per-catch should grow in a better offense, but fantasy is about opportunity and his role as 2nd or 3rd fiddle puts a cap on his upside. With only one year of production and a slightly diminished role, Pryor still has some risk, especially in the 4th round. Pick the latter guy and don’t be disappointed.

McCaffrey is a dual threat running back, notching 21 rushing touchdowns and catching 8 touchdowns over his last two seasons at Stanford. He’s also landed in a good position at Carolina, as the notion is that for Cam Newton to have longevity in this league, he needs to stop running so much himself and hand the ball off more, whilst also improving his accuracy in short medium routes which bodes well for McCaffrey. Reports (and photos) show that Cam is actually in the best shape of his life and no guarantees he changes his style which took the Panthers to the NFC championship game in 2015. Oh, and Johnny Stewart is not ready to hand over the keys, he still has something to prove.

Woodhead is also a dual threat, with the one main difference being that he has done it successfully in the NFL. Two years ago he amassed a combined 1,100 yards and 9 TDs, which was good for 11th best at his position. Woodhead is also now at the Ravens, where Flacco has lost a number of short yard targets in Smith and Pitta and now with Dixon injured for the year, the opportunity is great for Woodhead . The only knock for Woodhead is health, as he has missed 2 of the last 3 seasons. However, if health is your big concern, Sports Injury Predictor have McCaffrey at a 25% higher chance of getting injured this season.

Woodhead should be your pick 5 rounds later, but be quick before people catch on!

Derek Carr has just signed a 5 year $125m contract and he deserves it. He is also a really good, perhaps great NFL quarterback with a lot of success ahead of him. What he is not, at the same time, is a stud fantasy QB. He just crept into the top 10 for QBs last year but threw below 4k yards and under 30 TDs. Taylor on the other hand, finished as the 8

Taylor on the other hand, finished as the 8th best QB due to his legs. He is good for about 550 yards per season and 5 TDs rushing, which is very valuable. Throw the in the fact that Sammy Watkins is back and fighting for a big contract in free agency and they’ve lost TD hog Mike Gillislee, then you’re left with a good opportunity for Taylor in 2017. Pick the guy in 11th round, not the 6th round.

It looks even better for Tyrod now that Anquan Boldin has signed to the Bills, he’s a redzone beast, and will probably take action away from Charles Clay as a de facto Tight end as he did in Detroit last year

Kelce, or Baby Gronk in some circles, was the number 1 TE in fantasy last year and with Maclin now in Baltimore, this is sure to increase the reliance on Kelce. However, in the last 3 years in Kansas he has not got over 5 TDs because Smith doesn’t throw a lot of TDs. In the spot where you are drafting Kelce, you have the opportunity of picking up the likes of Spencer Ware or Allen Robinson.

Instead, why not wait a few rounds later and pick up Jimmy Graham who appears to have finally built up rapport with Russel Wilson and is returning to that red zone monster we remember from his time at the Saints. Oh and last year he nearly cracked the 1k mark with 6 TDs, I think he can more than match that in 2017 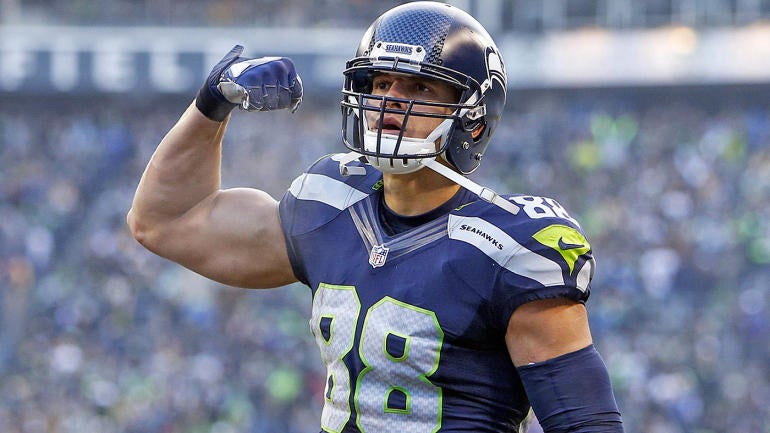 If you are competing against wily and experienced fantasy fans, then sometimes the draft doesn’t go as deep as you think. Therefore, you have to make sure you take advantage of the first 6/7 rounds as much as possible. You may find studs later on, but why not fill your roster with players you can plug and play at any given week. Soon your only worry will be thinking about how to slot 10 fantasy hometown players into 5 starting spots.