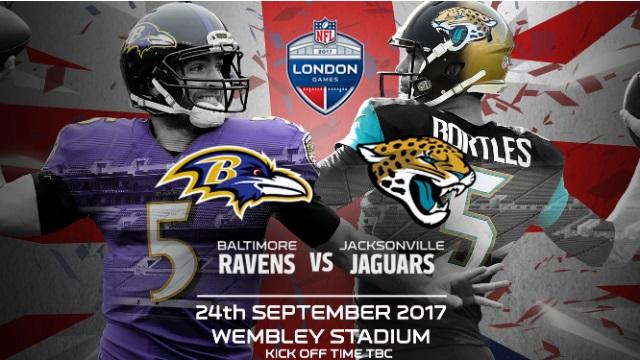 The first game of the international series takes place at Wembley at 1430 GMT, the first of FOUR that we have been blessed with this year for the first time, and another step to potentially half a season being played over here! I wrote a little on the London games when they were announced way back late last year – We should be grateful – It seems a long long time ago now, and well, in fairness it was nearly a year!

It looks distinctly like this will be a game for the purists and not the occasional fan as I can’t see it being a high scoring shoot out! The Ravens have a very solid defence and the Jags are no shambles on that side of the ball either, neither team exactly scares on offense either so it’s looking like it could be a low scoring defensive affair… Saying that, I thought the same about the Rams and 49ers on TNF a few nights ago and that was the highest scoring Thursday game in history! Good for us as we won 3 out 4 bets on the night for just over 4 points profit, nearly 50% ROI.

The Jaguars as always are the nominated home team, they have extended their London based games up to 2022 now so we’ll be seeing them every year all the way up to the re-negotiating of the new CBA, which, you never know could lead to the formation of a London based franchise! (Personally it’s not something I want, but give it 4 years and who knows what might happen) They have won their last two trips over here, both by 3 points. Last year against an Andrew Luck led Colts team who struggled to get going, and before that against the Bills, both in high scoring games! Side note: They also have all of their games broadcast live on Talksport2, so they’re really trying to establish themselves over here! Back on the field they are struggling on offence; over the summer the newly appointed head coach decided to announce to the world that they are going to run the ball 100 times a game an give Blake Bortles as little chance as possible to fuck it all up for them. This worked pretty well in the first game against an awful Houston Texans O-Line that their defence totally dominated, it gave them good field position and allowed them to ground and pound with #4 draft pick Leonard Fournette. That tactic didn’t work too well against the Titans last week though and if they fall behind in any game, they’re going to really struggle! Last year the Ravens had one of the best run defences in the league so good luck L4 in this game. He is being forced to run against 8 in the box making it incredibly difficult for them. But the team have no other real option.

Blake Bortles is a turnover machines, according to Blake Bortles Facts (@BortlesFacts) on twitter “Bortles has thrown 82 career touchdown passes to 9 different teams”… He’s only ever played for the Jaguars… I’m not sure if the Ravens are one of those teams, but I wouldn’t be surprised if they were soon added that defensive unit has created 5 turnovers in each of the first two games they’ve played. They’re 13/8 to do just that. Bortles has continued his career as being one of the best ‘garbage time’ QBs in the business, meaning that he does nothing until the game is out of reach at the end of the game. Last week he finished 9/9 for 127 yards and a touchdown in the final quarter. Before that he was a stinking mess, as he has been for quite a while now.

As mentioned above Fournette is the main weapon for this team, he had a good debut but was stifled last week against the Titans, his yards are set at mid-60s. I won’t be taking the overs of unders on that line, I think it’s about right. The trouble is that he’s dependant on game-script, and while I don’t see the Ravens running away with this game, I don’t see the Jags being able to control the game either.

Their pass catchers are obviously linked to Bortles which isn’t a good place to be, they lost Allen Robinson for the season in the first game leaving them with Marquis Lee and Allen Hurns. Lee was the most used last week with 76 yards from 7 receptions. Hurns wasn’t far off and he got the TD for his team finishing with 82 yards from 6 catches. I personally prefer Hurns and think he’s more of a threat to score than Lee. Unsurprisingly I won’t be going anywhere near this pass catching corps.

The Ravens have won both of their games so far, both against divisional rivals setting them up nicely for the rest of the year in the AFC North. They haven’t really had to generate any offence of note because their defence has been so utterly dominating.

QB Joe Flacco started the season recovering from a back injury and had to do very little against the Bengals or the Browns, throwing for 121 and 217 yards in the two games for 1 TD in each, both of them to Jeremy Maclin. Maclin is an average WR who does what is asked of him, that happened to be taking a slant pass 50 yards to the house in week 1 and falling over the goal line in week 2 against the Browns. They really don’t inspire me on offense at all. Perriman and Wallace do very little.

The area they do very well is catching short passes either from the backfield or in the middle of the park with their tight end. Javorius ‘Buck’ Allen caught 5 for 35 yards last week and ran for 66 from 14 carries, he led the backfield in both areas ahead of Terrance West who got a knock after getting 45 combined yards. The main running replacement for West and someone to keep an eye on here was Alex Collins recently signed after leaving the Seahawks, he’s a big bruiser and I could see him getting a score from a short goal line carry should they be able to get that close to the end zone. – However I was surprised to see 15/8 on Buck Allen at Coral/Ladbrokes. That’s a good price! The Tight end targets went mainly to Ben Watson last week, he finished with 8 catches for 91 yards, and he was someone I mentioned in that position when I did a little article for the BITEZ guys. The Ravens led the league in targeting their tight end last year so there’s no reason why that trend won’t carry on. You can get EVENS on Ben Watson making o3.5 receptions at bet365. He should also beat his yardage target, but I prefer this one.

The Ravens don’t have much on offense, but at Wembley a kicker should be at home and they have the best in the league in Justin Tucker, he can score from anywhere on the park, as I’ve said every week so far the offense doesn’t inspire me at all and against a solid Jags defence I think they’ll struggle to move the ball. If the defence does what I think it will they’ll be having some good field position and only need 20 yards or so to get to FG range. Team field goals is set at 10/11 for o1.5 and 3/1 for o2.5.

If this was on a neutral field in the states, I would be all over the Ravens on the handicap, but my reason for not taking the handicap here is the fact that the Ravens haven’t been to London before. It’s a unique trip for teams which can mess up their routine, and as much as anything these teams thrive on routine. I’m pretty sure the Ravens will win, they’re are a much better team at the moment, but that travel worries me so I’ll be avoiding the handicap, also while I think it will be a low scoring game, I’ll be avoiding that as well, the last 2 Jags games here have been 57 and 65 points. I doubt there will be that much tomorrow, but I’m not touching 39 points as a line, especially after the match on Thursday!

One thought on “#NFLUK – London Baby! #RavensFlock vs #Jaguars preview”