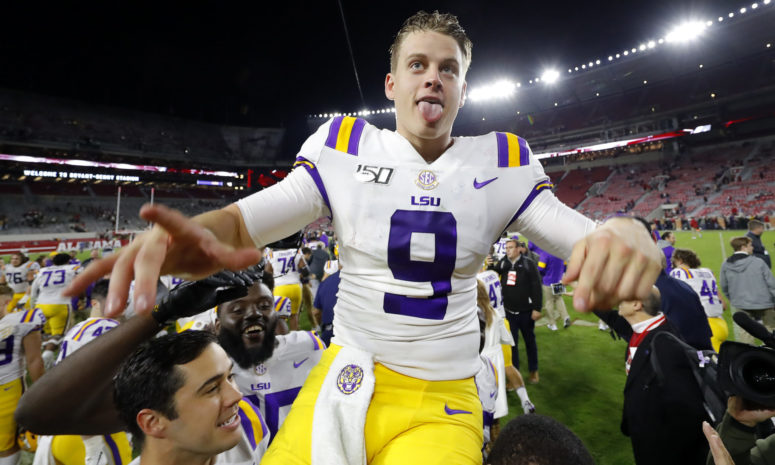 Well, that was a long night, the Bengals not even on the clock until 115am, and then taking a good 8 mins or so to make the pick that everyone in the world knew they were making anyway, I hope it was for TV, but still frustrating. The whole thing wrapped up around 530am in the UK.

First up. Fuck you Florio and your constant bullshit. Has he demanded a trade yet, has he refused to play? Fuck you and fuck all the mouthpieces out there for the shit they were spreading. I hope there’s this much made up crap for whomever is unlucky enough to be taken by the Jags at #1 next season.

From the things I’d read/watched/heard in the build up to it anyway.

The Raiders make some eye-opening moves again, with Lamb and Juedy on the board they went for pure speed, as did the Eagles with the Raegor pick when consensus had Jefferson as the 4th WR off the board. There’s obviously the Tyreek Hill comparisons and it’s a copycat league so it probably shouldn’t have been such a shock to see these guys ahead of others.

Terrell and Arnette as CB 3 and 4 a little surprising, they were ranked lower by many I read, but a position of need for both teams, so hard to argue really.

Jordyn Brooks to the Seahawks seems a big reach, he went in the 3rd round of both live mocks I took part in, but I did have a nice win on Seahawks drafting a LB, so I can’t complain too much about the pick.

Jordan Love. To the Packers. What I would have paid to have seen Aaron Rodgers immediate reaction to that pick! An hour before the draft he was on the Pat McAfee show saying how much he’d like an RB/WR to add to their offense, and then they go and draft his possible future replacement. Amazing. From the Packers stand point, they did it was Favre and Rodgers himself, so it makes sense to an extent, they get a 5 year contract on a rookie QB who they will get to sit and allow to refine into the league. He’s got the raw ability, the arm so I guess it makes sense having him there to sit, but I thought they’d go WR. Maybe they would have done had the 49ers not taken Aiyuk a couple of spots previous.

From my point of view, anyway…

Bengals made the obvious pick, as did the Redskins, in fact all went fairly to plan for the first 11 picks or so, Jets picked up Becton – 26 stone, 6’7″ freak of nature, raw but the highest ceiling of the OL guys.

The Broncos must have run to the phone when they realised that Jerry Jeudy was still on the board for them, He’ll fill in nicely alongside Courtland Sutton in Colorado. His route running will help Drew Lock.

The Vikings landed well too with the Eagles taking Raegor rather than Jefferson the pick before them; Jefferson was ranked by many as the 3rd or 4th best WR in the draft and they really needed to upgrade the position. They then picked up a little more draft capital by trading down and still got their CB at the end of the round, not Jaylon Johnson as I wanted (for a 4/1 bet) but Jeff Gladney, who ranked well among many.

Ravens will be happy with Queen falling to them at 27, they were always likely to draft an LB and he seems to be rated as the best in the class.

The Bengals are obviously first up at around midnight UK time, and as much as I want them to draft Denzel Mims here to add to the WR corps and as a possible Ross/Green replacement for the long-term I think they’ve got to go OL and hope for the likes of Pittman, Higgins, Shenault to fall to the top of the third round later on. Linebacker is, as always a need for them as well and Zack Baun is still there, it would be a risk after his diluted sample, but the talent is undeniable and he must be tempting for them as well.

However with a shiny new QB you’ve got to add to the protection up front and with that in mind it seems to me like it should be Josh Jones or Ezra Cleveland at 33. The nerds at Full10yards tell me that Cleveland is probably the more ready guy but needs to bulk up and Jones is raw but Josh Jones is the bigger guy with a higher ceiling. That tends to be the way the Bengals pick historically.

Skybet are offering odds on the 33rd pick of the draft. Unsurprisingly Jones is the favourite at 3.50 (WillHill) with Ezra Cleveland at 4.50 (Skybet). As I say I think they’re the most likely.

There’s no way the Bengals take a safety, in fact it won’t be anyone in the secondary after they spent in free agency, so the only way the likes of McKinney go is with a trade, which is a possibility although unlikely. Obviously they won’t take QB so no need having Hurts on that list at all. It won’t be RB either, so scratch them from the list.

Gross-Matos and Epenesa are slight possibilities although DL is one of the stronger points on the Bengals roster. So basically I think Jones, Cleveland or as a longer shot Mims although I think he’s too much of a luxury pick and as I say above I think they can wait to the 3rd for a WR.

No opinion on next RB taken, but it’ll likely be to Miami, so if you can find out if they like Swift or Taylor most you’ll be on to a winner. Next QB taken? No idea, Eason the fave there (1.83 on Skybet, 1.62 on PP, just 1.57 on Redzone), Hurts seems like he’ll go in the second round (5.25 available on him to the Steelers, although I think it’s too early for them to take a backup with other needs), but the QB class really isn’t very highly rated at all.

You’ve got a fair few markets on Paddypower actually – the players they had listed for draft position who haven’t been taken are all available still – Jacob Eason an interesting one there, set at 47.5 on PP, he was 49.5 on 888 before the draft. The worry is the Colts, Buccs, even the Jags could be in the market, although I do think it might be too early for any of them and it’s the Colts second pick of the round so I wouldn’t be shocked if they traded out of that one. I still think it will be o47.5 but it’s not one I’m looking to back. For now.

Jalen Hurts at 55.5 is a weird one. There’s no really anyone between the Steelers at 49 and Ravens at 55 who’d be in the market for a QB. (Bears, Cowboys, Rams, Eagles, Bills, Ravens)

Jets, Giants and Eagles – Offense or Defense. Defense is odds on with Giants and Eagles, offense very short with the Jets who pick at the middle of the round (pick 48). They still need weapons in the passing game so they’re all priced right unfortunately. Giants must be defense (pick 36). The Eagles (pick 53) may well to double WR such were their deficiencies at the position last year (2.25 for them to take offense)

And of course you’ve got position of the FIRST player drafted for all of the teams who are yet to make a selection.

I’ve no idea who the Pats (pick 37) take, Epenesa was touted in mocks and he or Gross-Matos would be a very Patriots type pick. Jeremiah had them taking Cole Kmet at 23, he’ll still be there at 37 but I think they’ve needs elsewhere and they’ve now got 13 picks this year so plenty of time to fill need.

Steelers no idea either, fuck them. The Bills? I think they probably go defense with strength on strength however I wouldn’t be surprised to see an RB is Taylor or Swift make it to pick 54. Texans (pick 40) only had 2 meetings with CB despite the desperate need at that position, so no idea with them either tbh. No idea on the Rams (pick 52) either.

You’d imagine the Colts will be taking WR behind the Bengals with the second pick of the round. They’ll have their pick of Higgins, Mims, Shenault and need someone alongside TY Hilton – 1.53 for offense… HOWEVER – They don’t really have pass rush so YGM there could be tempting and having spoken to Rob (@FFBritballer) he’s keen on that.

Sorry, this post was longer than expected as a “quick look” at the markets, but I’m feeling confident after yesterdays success and went into these too much.

Good luck if you back anything, thanks for reading. I nailed yesterday and had a couple of thanks from people today, thank you for that, definitely nice to have a good night after so long without gambling!