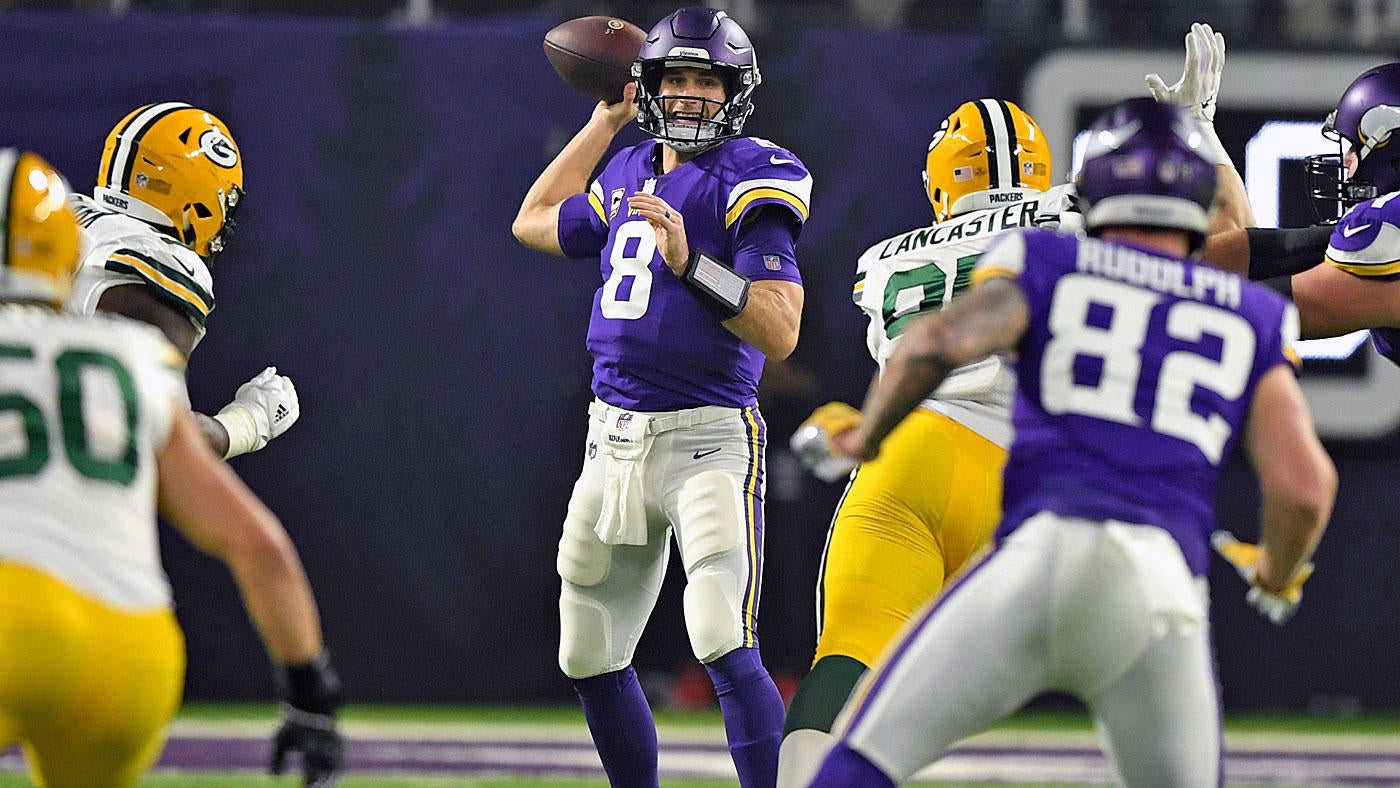 I was hoping to have a post done and ready to go for the morning, but 430am wake-ups for proper work killed me and sleep took precedent over doing any work last night, so I’ll give a quick buzz through the three possibly pivotal games tonight before the usual post tomorrow morning.

We do have a DraftKings contest set-up if anyone is interested – https://www.draftkings.co.uk/draft/contest/138584710 – Currently over half-full, nice work folks.

With just 4 games left in the season each week becomes increasingly important, I guess starting from Thursday night when the 49ers secured the NFC West with a month of the season left to go. Another impressive defensive performance getting them over the line with Brock Purdy looking fine with the little amount of work they are asking him to do each week. Kyle Shanahan for Coach of the year anyone?

A win for the Vikings tonight wraps up the NFC North, although they just need one win in the next 4 games, they are 99% likely to do it regardless of the result here. The Giants and Commanders are looking for a wildcard spot, loser probably won’t get in, although the Seahawks loss helps them. Falcons and Saints aren’t good teams but a win for each keeps them in the running for that terrible division. The Lions face Zach Wilson, which helps their cause at the Metlife.

The AFC side is equally interesting, the Ravens need to keep grinding out wins to stay ahead of the surging Bengals in the North, they should have enough to see off Deshaun Watson and the Browns here. The Bengals go to the Buccs as favourites, looks like they are finally getting some respect for the wins they’ve been racking up. The Pats and Raiders are still technically alive although neither very good, loser takes a big hit to any small chances they have of the post-season and Chargers vs. Tennessee will be very interesting as well, Chargers can’t defend the run, Titans can’t stop the pass.

The Monday Night game stinks again, sorry @jamesc294 – Boy, am I glad I got James in to do the stand-alone games

The 10-win Vikings are only just over a field goal favourites hosting one of the worst teams in the league? The disrespect! Not only do they have 10-wins, a post-season spot essentially secured and the best WR in the league, but they were embarrassed by a divisional rival last week where they lost to the Lions. It’s safe to say they’ll be fired up, and it’s a 1pm local time start, so no need to worry about Cousins… although it is a day early.

I’ve mentioned the Vikings spine each and every week, Dalvin Cook isn’t up to his former self but still a good RB and they got Alexander Mattison a score last week as well. Justin Jefferson, Adam Thielen and now TJ Hockenson are a very solid group in the passing game and KJ Osborn isn’t bad as a 4th option either. Kirk Cousins maybe his best game of the season last week in their loss, throwing for 425 yards, half of them to Justin Jefferson who finished with a franchise record (and somehow no TD)

Their defense stinks, as was made evident by the loss last weekend.

The Colts have Jeff Saturday, playing on a Saturday, will that make them less shit? Probably not. The offensive line hasn’t been playing well and Matt Ryan at QB is seemingly less mobile than a tree, has no arm strength and apparently makes terrible decisions now too. Jonathan Taylor is still there, had scored 3 games in a row before the loss to the Cowboys a fortnight ago, and in fairness is averaging 4.5 ypc, not as bad as I thought he’d been this year.

Michael Pittman doesn’t really exist any more, Alec Pierce hasn’t had a terrible rookie season, Parris Campbell can do things occasionally. The tight ends are probably of more interest Jelani Woods looks like a beast in the little work he’s given, Big Mo Alie-Cox hasn’t done a whole lot this year, but he’s just bigger than normal humans. Kyles Grandson, I mean, Kylen Granson is another option for them in the TE room.

Their defense actually ranks middle of the pack by DVOA.

Surely the Vikings win and cover? I know they’ve not been impressive and somehow find ways to keep every game within 7, but this is the Colts we’re talking about. Picks: Vikings win and Cover, Over on total. TJ Hockenson o4.5 recs – 7/10 (WillHill) – If they’re going to keep the line at 4.5 I’ll keep taking it. I’m going to put together a “Both players to score” trixie at the end for a little fun.

The Ravens sit atop the AFC North despite a host of injuries throughout the team this year, this week they are actually looking a lot healthier than they have all season, although the main man is missing out here with Lamar Jackson given an additional week to recover from his injury, but they will have Tyler Huntley in after he left early last week with a “concussion” – I write it like that as apparently he didn’t actually have one it was just the leagues new rules protecting the player.

JK Dobbins returned and while he seemed to lack the get-away speed he finished with 15 carries for 120 yards and a TD on his return from injury, have to expect him getting most of the carries here allowing them to ease off Gus Edwards who still doesn’t look right after his return from injury. Ronnie Stanley is the key man for them in the running game, they average considerably more with him over him missing.

The passing game isn’t much to talk about really, Demarcus Robinson the man getting most of the targets recently, you can’t read too much into last week with the changes at QB, but it’s him and Mark Andrews leading the way, Devin Duvernay the odd trick play type thing, and Desean Bloody Jackson who apparently still exists.

I’ve buried the lede slightly here, Tyler Huntley is in at QB after getting quickly through protocol, he is a downgrade from Lamar, of course, but it’s not a disaster for them he knows how to run the offense and his mobility helps them.

The Ravens defense is outstanding since bringing in Roquan Smith.

The Browns. Fuck ’em – I got to see a full game of them last week against the Bengals. Watson looks terrible, they brought in Jacoby Brissett for a 4th down and he overthrew the receiver, the run-game isn’t working as well with Watson in there either, Kareem Hunt seemed to get a lot of the ball last week on the deck.

Amari Cooper looked like the favoured target as you’d expect, although Donovan Peoples-Jones led the team in targets, receptions and yards against the Bengals, but the main beneficiary of Watson from a betting standpoint at this early stage looks like it’s David Njoku who found the endzone last week.

The Ravens should win and cover. I don’t think the Browns are very good, and I’ll happily take the Ravens getting the three.

It’s apparently going to be snowing through the day up to around 2300 local time in Buffalo, so… all the way through the game. Of course it will be cleared to some extent and they’ll get the game on, but that generally leads to UNDERs and running backs. Although surprisingly to me the total hasn’t moved much on the release of those photos, the Bills were already a solid under team this year.

Tua Tagovailoa has never played in anything like this temperature and a team coming from sunny Miami to this type of climate? Safe to say it’s going to be rough for them. The running backs should get a good workload and it looks like Jeff Wilson will be a “go” despite getting banged up last week and Raheem Mostert is in fine health, Salvon Ahmed or Myles Gaskin may get a little if Wilson doesn’t play the full game. I like Jeff to score but obviously a risk with his injury (and the fumble which created Tyreek Hills TD last week)

The offensive line has been banged up recently but Terron Armstead is a week healthier which helps them, that has hurt Tua as he’s had his worst games of the season over the last two weeks, although it might just be the fact they finally had to play decent teams after an incredibly easy stretch. Tyreek Hill is as good as he’s ever been, his speed might be useful in slippy conditions so I’m not ruling him out completely here. Jaylen Waddle doesn’t look good playing through injury though. Mike Gesicki hasn’t had a catch in a month now, but Trent Sherfield has looked good as the WR3 there.

That was far too much on the Dolphins.

The Bills are the #1 seed at the moment and a win for them here essentially ices the division, it levels the tie-breakers with Miami and puts them 3 games ahead with 3 left.

They have relied on offense but it’s not been great in recent weeks Josh Allen with his lowest QBR of the season against the Jets, and just 147 yards. It may well be his legs which lift the team in this one though, in each of their one-score games he’s had at least 40 yards and/or a TD on the ground (bar the Chiefs) and with the weather as it is, I’d expect him to top his rushing line, although 46.5 is right about there.

The running backs should get a lot of work then, probably led by Devin Singletary who’s been typically average recently, James Cook has been getting an increased workload recently, Nyheim Hines has generally been a kick returner, they may all get mixed in if the Bills choose to go run-heavy to an extreme extent.

Stefon Diggs has been brilliant for them, but outside of him they’ve struggled to get Gabe Davis involved and Isaiah Mckenzie probably looks the more important second target for them especially in short-yardage in the redzone. Dawson Knox has been frustrating to follow and for some reason they signed Cole Beasley back on the roster this week, well done to him. In fairness I don’t think his career should end due to him not getting vaxxed, so I guess he deserves another go.

Both defenses are decent enough although the Bills ability to get pressure with just 4 players could cause issues for Tua.

Bills should win here, I’d take the Dolphins getting the points though, and under on the total. Josh Allen o46.5 rush yards.

Both players to score trixie;

A little bit of fun for small stakes.