Week 7 is upon us! After another week of upsets and strange results all around. The Chiefs lost their unbeaten record at home to the Steelers, The Falcons lost to the Dolphins who are somehow 3-2 despite being horrible all season. The Packers suffered the hardest defeat of the weekend and possibly the entire season when Aaron Rodgers broke his collarbone (also ruined out Pack-3 pts bet) mixing up the entire NFC.

If you fancy the Vikings for the NFC North then you can get them at just 19/20 and around that price in most places. Personally I’m not writing off the Packers, Hundley looked pretty good in pre-season and has had 3 years learning that scheme so I’ve got a little faith in them still, they’re 15/8 to come back and take the North. IF for some reason you fancy the Bengals to win this week against the Steelers then it could be worth doubling them in the divisional title race. They’re a best priced 6/1 now.

The NFC South is an interesting one with no team out of it, but I wouldn’t be taking the Falcons as favourites. Tampa are out to 10/1 in places now, despite only being a game behind. Would I take the Saints?! Have they finally got a defence? Tough choices all round there!

Anyway, food for thought there, on to Thursday night football

The Chiefs go into the Black hole after being humbled at home last week, the Steelers are their kryponite though and the Chiefs dominate their divisional games. They’ve won their last 12 against AFC West teams.

I have to write about the Chiefs every week at the moment, so I’ll try and keep this relating to injuries and last weeks game this time around!

Just as worrying as the defeat last week, and the inability to slow down Lev Bell and Antonio Brown, who are practically the only 2 players you have to worry about on that team at the moment, were the possible concussions to Tyreek Hill and Charcandrick West, the second named who took a helmet to helmet shot from the “hard hitting” Mike Mitchell. The same “not that type of guy” who took Alex Smith out at the knee with an extremely late shot – https://www.arrowheadpride.com/2017/10/16/16481608/steelers-mike-mitchell-doesnt-benefit-doubt-after-two-bad-hits-vs-chiefs. Yeah, he’s definitely not that type of guy….Hill apparently cleared protocol so he should be a go and let’s be fair he’s the more important of the two. Although that hit also killed another of my bets last week where I tipped up West anytime. It seems unlikely that West will play this week.

They will be hopeful that Albert Wilson can return though after he missed last week and they were forced to play 4th and 5th string WRs at key moments of the game.

With all the injuries in the pass catching corps I think you’ve got to expect most of the game to go through Kareem Hunt again. They don’t really have anyone else at the RB position if Charcandrick West misses out, which seems likely he will be the only guy in the backfield.

Well, that turned into just bitching about Steelers, it’s too easy to get dragged into that sometimes. At least if I get it out of the way now I might be able to do a better write up on the Bengals game on Sunday… 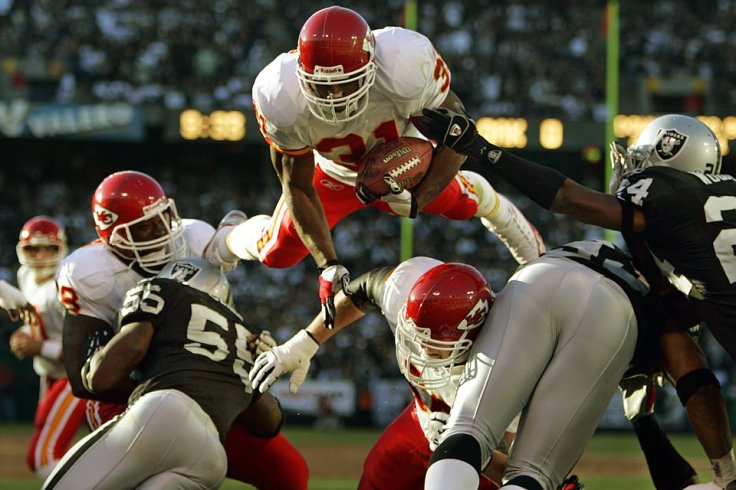 The Raiders had Derek Carr back last week after his missed just one week with a broken bone in his back. It was pretty impressive that he was back with the team! However his performance wasn’t quite as promising, throwing for just 171 yards, mainly of short dink and dunk passes as they were trying to get the ball out of his hands quickly to avoid him getting knocked to the ground with a big bloke on top of him. He also gave the ball away twice, admittedly against a good Chargers secondary, but the Chiefs usually have a good defence as well, and a very good pass rusher in Justin Houston who has had a great year so far.

One brighter spot on the offence is that Amari Cooper finally managed to catch a pass! 5 in fact for a massive 28 yards. Seeing as he’d only caught 4 passes in the 3 games previously it was a pleasant change for him, and hopefully for the Raiders and him personally it is the start of him turning it around. In his “absence” Michael Crabtree has been the guy, he was always the red zone threat of the two of them and he’s retained that, scoring in 3 of the 5 games they’ve had this year, catching 6 in 4 of the 5 and topping 52 yards in each of those 4. Jared Cook is someone I would have expected to have more yardage over the last 2 weeks but he’s been struggling. This week, with Marcus Peters shadowing, I would imagine, Crabtree, there should be more yardage for Cooper and Cook, whoever goes against Terrance Mitchell usually has a good game against the Chiefs. Do I dare go on Cook yards again after he’s burnt me? I’d imagine he will be around 38.5, he has beaten that 3 times, but the Chiefs are very good vs the Tight end so I’ll give him a miss for tonight

The run game should be going through Marshawn Lynch, but they’ve been using him sparingly, this week could be the week they let him off the leash though as if they lose this one, they’ll be pretty much out of the divisional race already. He’s been getting about 12 carries a week, for around 45 yards a game. He has scored 2 TDs though. But so has Cordarelle Patterson who they’re using as a gadget player and getting into the game where they can, he broke free for his second of the season this week but is in no way reliable as a betting prospect. Jalen Richard is the actual RB2 on the roster, he’s had 26 carries at about 5 yards a go so far this season.

Although I believe the Raiders have a better roster on paper. Most people did, I know a lot of us were expecting them to be challenging the Patriots this year, I can’t see past the Chiefs for the win this week. The Raiders just aren’t clicking at the moment, and I don’t really see that changing tonight either. I believe that 3 points is the biggest favourite an away team has been in Oakland in over 2 years which seems crazy. I don’t think it will be a high scoring affair as the Raiders just aren’t scoring much at the moment. But I won’t be taking the unders despite it being tempting.

A tough one to pick tonight, I have a whole load of possibles. Amari Cooper would have had 60 odd yards last week if he hadn’t had a big gain called back for a holding call that was nothing to do with the play, he’s as low as 46.5 yards, but can I trust that he’s “back”?His receptions are also set at 3.5, at 4/6, I think he’ll hit that line. The Chiefs only really have Kareem Hunt in the running game, but will he get over 21.5 carries? He did a fortnight ago. And with it being a must-win game for the Raiders, surely they’ll give the ball to Lynch more than 13 times, despite the fact that they haven’t so far this season? DeMarcus Robinson at 5s on WillHill is a teaser too, he’s 9/4 on 365 and was the #3 WR last week, although DeAnthony Thomas got the score, so it’s a big risk. As is Akeem Hunt should they not want to risk Kareem on goal line work.

Skybet also have the old 3 for 2 request a bet thing on again, I’m liking both teams to score FG in both halves (7/1 tonight) Then in fairness the others are pretty tough to call, there’s not a whole lot of selections up there at the moment so may be worth waiting to see if anything else pops up.

Good luck if you follow anything, should be a cracking game again, there’s been some really good ones on Thursdays this season.