This is going to be a busy week and weekend for me this week, so i’ll be keeping the write ups short, and basically just using the ones I do for the OLBG expert blog, with added anytime scorers.

It’s the mother in laws 60th birthday so won’t have a huge amount of time over the weekend, but should be able to get some prop bets out over the weekend still if I get an hour or so, fortunately the mother-in-law is the mother of @jayhatton49 who helps with the site on occasion, so I’m sure we can make an excuse to get away from the festivities for an hour or so and figure out some bets.

At the start of the season we would have all ignored this game and classed it as a battle for the number 1 pick. Fast forward to now and the Bills are half a game behind in the AFC at 5-2. Sean McDermott must be high in the running for Coach of the year with the job he’s done here. They have a solid defence, Shady McCoy, and Tyrod is looking good too. The reason they’re doing so well is that they are +14 on Turnovers this season, which is quite something. The Jets looked like they’d struggle to get any win this season, yet they sit on 3 and could have had more but just don’t seem to be able to finish games off recently. Maybe it’s all part of the master plan. Maybe it’s just who they are, they keep tripping themselves up. The Bills are far better at home this season, but they should take care of business here, and I’d take them -3 if you can. They’re 6-2 in the last 8 ATS vs the Jets – BUFFALO

Bills Pass Catchers – With the addition of Kelvin Benjamin and the return of Jordan Matthews the Bills went away from my boy Nick O’Leary at the weekend, so we’ll be off him for now. Skybet have boosted a bet involving Kelvin Benjamin. I won’t be having anything to do with him tonight, he’s a big body so he’ll make a good target for Tyrod, but he’s been there 2 days so really hasn’t had much time to learn the playbook. He’s a definite avoid, even at 10/3. Andre Holmes is a little more tempting, he’s averaging less than 2 catches per game, but has 3 TDs on the season and got one in their last game, he’s a best of 5/1 at Unibet. A little more interesting. Brandon Tate gets a little work, but is mainly special teams, Unibet are a standout 12s on him. Logan Thomas is the other Tight end they have used this year, he’s a converted QB who somehow stole a TD from O’Leary the other week, he’s as high as 30/1 on Paddypower and as low as 21/10 on Ladbrokes and Coral, who have apparently decided they don’t want to take any bets on anytime scorers on this game. They are horribly low on every player. Logan Thomas has 3 receptions on the season so obviously isn’t very likely to score. Deonte Thompson might have been a thing for a week, he had over 100 yards 2 games ago followed by 0 last game. He’s not worth going near. Zay Jones did better last game, but again isn’t trustworthy enough, the addition of Kelvin Benjamin should actually help him in the long run, but that remains to be seen.

Bills RBs – The Bookies definitely aren’t taking any chances with Shady McCoy, Ladbrokes have him at a frankly ridiculous 1/3 to score anytime. He has scored 3 in 2 games, but was on zero for the 6 games previous to that, so while I think he probably will score tonight, he’s an avoid at the prices available. Mike Tolbert has been getting phased out and isn’t really used as the goal line back any more either, so he’s off my list as well.

QB –  Tyrod Taylor is a good QB for fantasy football despite his stats not being too attractive, he doesn’t throw for a bunch of yards, averaging under 200 per game and a max of 2 TDs in a game this season, but he does what is needed. The Bills basically rely on their defence and a running game and it’s led them to 5-2 on the season so far. 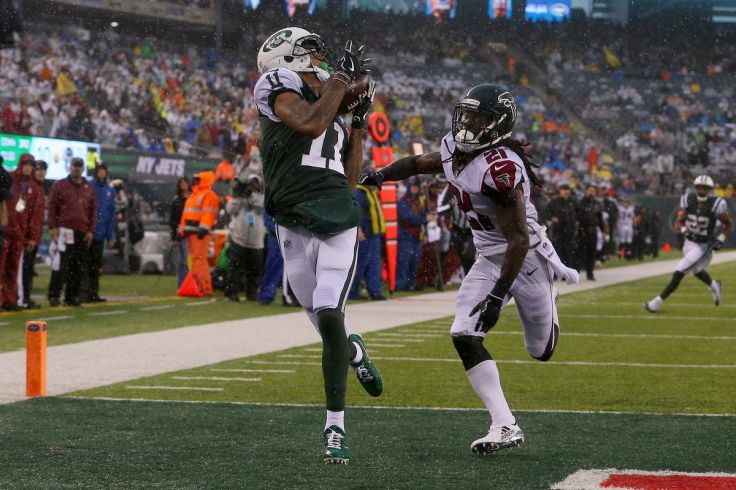 Jets Pass Catchers – This is a tough area to call due to the Bills defence being so good this season, they did get burned by AJ Green but he’s a top 5 WR so that’s nothing to be ashamed of, but I do like the price on Robby Anderson for the Jets, he’s a burner and without the suspended Jeremy Kerley playing, he’s got even more chance of getting catches in this offence. He’s as low as 6/5 in places, but Paddypower have him at 3/1 and I definitely think he’s worth a bet at the price – Robby Anderson anytime TD – 3/1 – 2pts. The other recent “star” in the passing game for the Jets has been Austin Sefarian-Jenkins, while he doesn’t put up many yards he had scored in 3 consecutive games before this weekend and has price has dropped with that, he’s now a best of 2/1 which is a no-go for me unfortunately. They’re actually really thin at WR without Kerley, Jermaine Kearse is the next best after Anderson, he’s been targeted a lot so he should do well tonight despite going against a good Bills D, a line of 40.5 on Skybet is tempting, he has beaten that line in 4 of 8 games. So it’s pretty much bang on a 10/11 play. Eric Tomlinson randomly caught a TD last week, if you think he can do it again he’s 20/1 on Paddypower. That was only his 5th catch of the season though. I don’t think he will.

Jets RBs – A little more interesting here, Bilal Powell seemed to get the bulk of it last week, 14 carries, while Matt Forte only got 4. They are similar players and both chip in through the air as well, 3 and 6 catches respectively last week. I would expect Forte to get more this week and it to be closer to 50/50, but fuck knows, so i’ll be avoiding everything to do with them frankly.

Jets QB – Josh McCown, he’s done enough to keep the Jets in games and has honestly done better than most expected, but he can’t do it when the push comes to shove and he’s part of the reason they’ve been losing these close ones. Although in fairness, he’s a big part of the reason they’re anywhere near anyway, so it’s a tough one with him. Anyway, I won’t be touching his yards or anytime TD price.

So… I think the Bills defence will get it done, McCoy has been on form recently and they’re just the better roster. Don’t take anything over -3 on the handicap, a field goal is about where it should be.

That’s it for tonight’s game. It is actually shaping up to be a good contest which I’m shocked to find myself saying. Enjoy if you get up for it!

Oh, a final word of warning, don’t bother trying to watch it if you’re colour blind. It will be a wasted effort!

Good Luck with whatever you’re on.