Week 11 already, only 6 games left of the regular season, you wait all year and then it flies by! Frustrating weekend last week as the Patriots gave Dwayne fucking Allen the TD pass instead of Gronk meaning we finished a little down on the weekend instead of a lot up! So we move on to tonight.

An interesting matchup, both teams are on 4 game winning streaks without really impressing in any of their games. A freak of the schedule means that they’ve made their way up through the AFC North from Cleveland, through the Ravens and Bengals to face the best of the division, and possibly of the conference. They beat the Browns by 3pts, Ravens by 3, and the Bengals by 4, although that should have been a lot more, the Bengals had no right to keep in the game last week! Now admittedly Mariota had been carrying a knock for those games, and was practically immobile until this week vs the Bengals, so that didn’t help them, and could be a slight excuse, but they haven’t looked the team that they should have been all season.

The plus points for the Titans, on paper they have a good offensive roster. The two-headed rushing attack of DeMarco Murray who is undoubtedly the starter, and Derrick Henry, who could be a starter in most teams in the league. Murray had an average game last week saved by touchdowns, averaging just 3 yards per carry on 14 attempts, but 2 rushing and 1 receiving TD gave him a decent fantasy week and would have landed some good odds in betting! He’s been carrying knocks all season though which has affected him but they seem intent on forcing the ball to him still. Henry infact has a better YPC on the season, averaging 4.4 to Murrays 4.

They’re also pretty loaded at WR as well now that Corey Davis has returned. He was the number 5 overall pick and personally my favourite receiver in the draft. In the few games he’s played he’s led the team in targets. He got 10 vs the Bengals last week, catching 4 for 48 and should have had a touchdown but lost the ball into the endzone for the dreaded touchback. It’s all trending up for him though, he’s at 47.5 on 365, I think he’ll beat that line, and he’s 3/1 on there for an anytime TD as well. Rishard Matthews has been solid for the team for two seasons now and led the WRs in yards last week with 50 from 5 catches, he should keep his role as he’s still been getting 6 or 7 targets per game even with Davis back. Eric Decker looked like a good free agent signing over the summer but it’s not really happened for him, he’s got a TD on the season, but not much else in fairness. He should be used more often in the redzone, but things just don’t seem to be clicking for him this season. That being said, he is a big lad and the Steelers are fairly good at closing down tight ends so he could be a viable target tonight. The rookie Taywon Taylor gets a few targets per game as well, and he’s very high priced, at 20/1 on PP for the night, it’s a tempter… He won’t get many catches, he’s only scored one on the season, but if the Steelers close down the favoured targets there’s a chance there!

The Steelers are pretty good at stopping the tight end, but the Titans have one of the best in the league in Delanie Walker, he was actually led the team last week with 60 yards, and is averaging around 50 per game on the season. He’s set at 41.5 on Skybet. Which annoyingly is around the right line.

So, from a Titans point of view, I’m keen on Davis, he’ll have a breakout game at some point, it’s a tough matchup against this Steelers defence, but they are missing CB Joe Haden who broke a bone in his leg last week which is a big loss for them, and there’s a chance that shitty-filthbag Mike Mitchell (safety) may miss out as well. What a darn shame. I really hope it’s not something serious. That would be terrible for him. Both of those are losses for the Steelers defence, so it should help the Titans WRs a little. 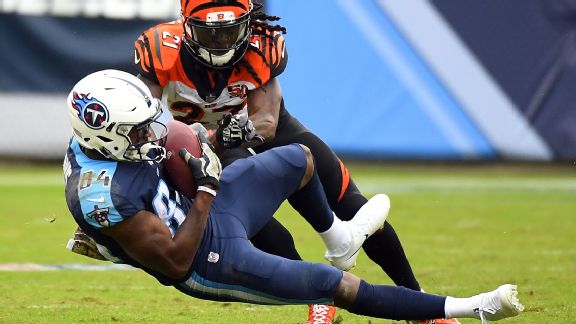 The Steelers have beaten everyone unconvincingly so far this season, especially the Colts last week in a game they probably deserved to lose, but they grind out these results and that’s why they’ll lose to the Partiots in the play-offs again. The AFC North has had an easy schedule this season, so there’s a slight possibility they might actually get home-field advantage which could make all the difference for them.

In fairness they are probably due a blow-up game, a short week, at home, against a team with a pretty crappy defence, that’s been scraping past shit teams … This could be it.

I don’t like Big Ben, he’s a drama queen who threatened to retire in the pre-season and he probably should have done, he has not been great this year… His passer rating when under pressure… 5. A PASSER RATING OF 5 WHEN UNDER PRESSURE. Luckily for him he’s got a very good offensive line in front of him so it doesn’t happen too much!

His favourite target as always is Antonio Bro…. oh hang on, no it’s not, who’s this young whipper-snapper, this Juju fella?! Juju Smith-Schuster is the youngest player in the league but isn’t playing like it, he has caught more passes than Antonio Brown in the last 3 weeks, for 150 yards and 2 TDs more than Brown, admittedly a 97 yards TD against the Lions skews that slightly, but he’s proven himself reliable and solid in the redzone and has scored in 3 consecutive games now. I was honestly expecting to find 15/8 , 2/1 or similar for him tonight, but the bookies know their shit sometimes and he’s best priced 6/5 tonight. He should probably score, but I can’t take that price. Antonio Brown usually bounces back after a poor game and he had one of them last week dropping a couple of catches, he’s set at around 90 yards tonight, he should go over it, but I can’t take that high. Martavis Bryant is an after-thought and not someone i’ll be going near.

At tight end, Vance McDonald has been limited this week and is listed as questionable, so it may well be worth looking for Jesse James or Xavier Grimble, Mcdonald is 5s, James 4s, and Grimble (with one catch on the entire season) 16s.

There’s only 1 guy in the running game, LeVeon Bell, they look like they are going to run him into the ground this season, he seems to be on about 30 touches per game which is a very high workload! But it doesn’t seem to be lessening for him. He’s still one of the best RBs in the league and averaging about 110 combined yards per game, and is already beyond 1,000 combined yards for the season, but he’s just not doing as well as I’d have expected this season which sounds ridiculous but he’s just that good, he’s only scored in 4 of the 9 games as well, which for someone who gets, give or take a couple of James Connor carries, all of the carries isn’t great.

So all of the odds on the Pittsburgh guys are understandable pretty short. 6/5 and below for the 3 main guys mentioned above. It could be worth taking the 4/1 on Jesse James at 365. There’s so little value on the Steelers otherwise. But Juju over 57.5 yards at 5/6 on PP should be a good bet.

All in all, I think Steelers should probably cover the spread of 7 tonight, in theory it should be a low-scoring game, so the unders is the logical bet, it’s going to be a cold night up there, both teams prefer to run the ball which slows the game. It all points to unders, but I won’t be taking it. – I have no logic for it, but I think it could be a bit of a blow-out for the Steelers, which should mean Mariota throwing the ball and more chances for their WRs, well I hope for that anyway

More than I really wanted to put on a Thursday night game, but 7.5 points isn’t too extreme.