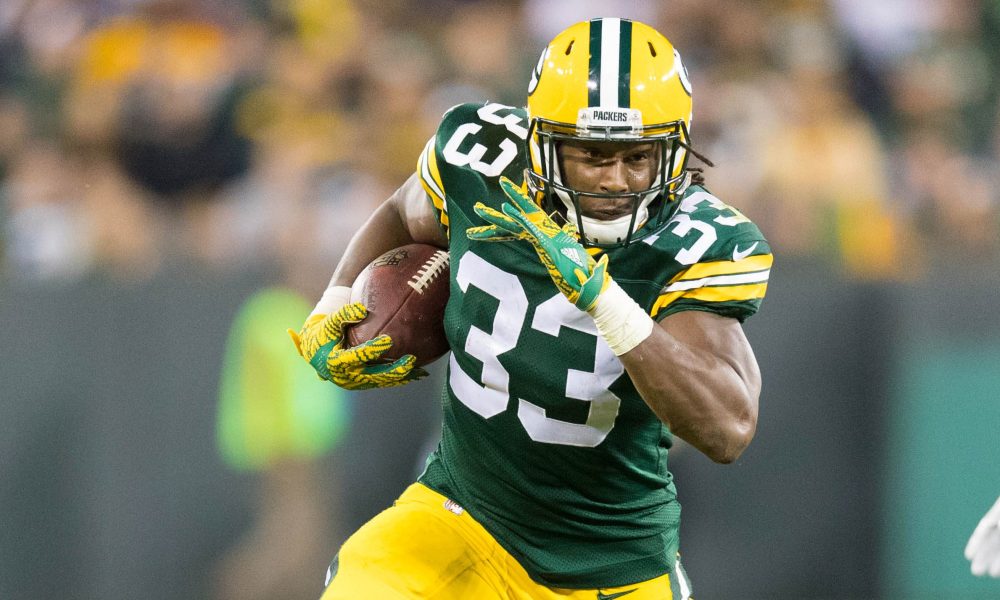 Well, I finally had a good week on the blog, which would have been even better had I properly tipped my boy David Moore again! I know a few of you got on him anyway at 8/1! Shame he didn’t get his second for a 100/1 winner, but you know, he’s paid for my month so I shouldn’t be too greedy. BUT, I hit 6 out of 10 summarised bets for around 20 points profit on the night! Long, long overdue!

The spread treble had 2/3, the Partiots game being a push if you got on at the right time, so returned around 3/1 instead of the 7/1 for the three results. The anytime TD scorers would have been even better had Juju not been adjudged down on the 2 inch line after scraping his head along the ground… Who knew that the helmet meant grounding?! – But the Colts tight end, Eric Swoope-d into the endzone for a 13/2 winner (was available at 11s earlier in the day annoyingly) and Rayne Dakota Prescott got in at 15/2, a price that was far far too high for him. The player props went all right too, Winston smashed past his line finishing with nearly 400 passing yards, Duke Johnson hit his 21 yard target in one play early in the game, and the NAP of the day, my biggest bet on Josh Gordon landed as well! – The Keke Coutee one should have come in too, he had 34 yards early in the game but then the Texans fell apart, couldn’t protect Watson and looked a hot mess, Coutee ended the game losing a yard and finishing on 33!

The difference in lines that I put at the end of the write up, somehow only one of them middled, Josh Gordon giving us a double win. It meant profit on that experiment but I thought we’d get luckier than that and have at least one more, Tyler Boyd was half a yard from his overs line.

BUT Positivity. I made a decent amount on the day and hopefully some followers did too!

A few results that shocked me, The Bears somehow lost to Brock Osweilers Miami Dolphins, the line moved from -3 early in the week to -6.5 on game day on the news that Tannehill wasn’t playing, but their defense stepped up in a big spot and Albert Wilson did his thing smashing 2 huge TD runs to take the game to overtime, where they won at the very end. The Panthers was one I wished I could take back, I said in the preview that it was a potential trap-spot and annoyingly I was right, they fell behind early on and just couldn’t get back. The Rams are the last remaining unbeaten team in the league after a win in the snow in Denver, Todd Gurley ran for 208 yards, that seems to be the way to beat the Broncos now.  The AFC North got blown open with the Steelers winning against the Bengals on a play that shouldn’t have stood due to OPI, but the Bengals killed themselves with a few stupid plays leading up to that moment, as a fan when we went ahead with 1:18 left on the clock you could tell exactly what was going to happen, there was an unerring inevitability about it. The Titans got shut out and allowed 11 sacks on their QB. Marcus Mariota actually finished with more sacks than pass completions, behind an O-Line that many thought was top 5 in the league that’s a crazy stat. Oh yeah, the Cowboys SMASHED the Jaguars, that’s probably the biggest shock of the week, I didn’t think they had it in them!

And a shout out to @coxyyork and @ToonBazza (I think) who took the top 2 spots in the Draftkings comp and went home with $63 and $27 from their $5 entry. It was very close at the top there, Coxy winning it by 0.4 of a point. I was down in 5th less than 10 points behind, and a side note, Lorddescu whomever you are beat me H2H. Again. I was 80th from 1102 in one league. I do far better in the “Tiers” matches, I should stick to them.

Every team gets injuries through the season, it’s how you deal with them that makes a team one of the better in the league. But the 49ers have had some horrible luck to some major positions which has kiboshed their most anticipated season in years. Jerrick McKinnon was paid big money and didn’t even make the start of the season. Jimmy Garoppolo and his sexy face last a few games before he made on stupid move which ended his year with a torn ACL, their wide receivers haven’t all been fit for any game yet, their run game has now lost Matt Breida for at least this game. He had been the better runner back there. They wouldn’t have been challenging the Rams at the top of the division, nowhere near, but they could have pushed for the playoffs had things gone well. They didn’t and now, on the plus side, they may well end up with a top 10 pick again.

In fairness I don’t think CJ Beathard is as bad as a lot seem to think, the loss last week wasn’t on his shoulders, he had 34 completions, for 349 yards and 2 TDs, and they out-gained the Cardinals significantly, he did have 2 picks though.

The biggest loss in that game came with Matt Breida leaving the field after putting up 56 yards from just 8 carries. He had looked very good early on in that game. Alfred Morris (13/8) and Raheem Molstert were left to carry the load, Molstert (20/1) came in a fumbled – Shanahan has talked him up a bit this week, as a good coach should saying he expects him to bounce back, I’ve got to have a small nibble on him at 20/1. So it was on Morris, he finished with 61 yards from 18 attempts and he’ll be the man carrying the main load tonight. My boy Kyle Juszczyk (It’s in my dictionary now) was another beneficiary from the Breida injury and he’s one I’ll be looking at for tonight. He’s listed a full back but they use him a heck of a lot in the passing game, once he gets going you’ve got to be a brave man to stop a charging 240lb 6ft 1 guy. He finished with 87 combined yards last week. The line on him this week – 32.5 on 365. I’ll be hitting the overs on that. He’s also 6/1 to score anytime, he hasn’t found pay-dirt this season though so that’s a bit riskier. Logically Alfred Morris SHOULD beat his 51.5 yards line as well with little competition back there.

Wide receiver is a tough place to play for the 49ers, Dante Pettis is out, Pierre Garcon is questionable, Trent Taylor doubtful. Marquise Goodwin looks like he’ll be available but isn’t as effective with Beathard starting at QB. With Taylor likely out of the slot position his place looks like it will go to Richie James or Victor Bolden. They got 1 catch each last week, and the beauty and frustration of Shanahan is that he likes to move targets around. Annoying for us, but when one is priced at 6/1 and one at 20/1 I know which I’ll be backing. Kendrick Bourne looks like he’s more than an afterthought as well, he had his highest targets and catches of the season last week, 4 from 7. He’ll probably top his 24.5 line, it’s a low line, but it’s a risky one. The man they like in the passing game is George Kittle, he played with Beathard in college and he’s turning into one of the better tight ends in the game, he’s the complete tight end. I won’t be taking him o56.5 but he’ll be there or thereabouts.

Aaron Rodgers had a bit of a nightmare last week against the Lions, he was hit a lot, held onto the ball too long and didn’t start playing until the second half of the game, because they got down so far he had to throw a lot in the second half, finishing with 32 from 52 for 442 yards and 3 TDs. There was a little worrying news around him possibly re-injuring his knee in the week, it could mean less mobility for him, but it’s tough to stop a scarmbler from scrambling, so while I am tempted to take the unders on his rushing line (16.5) It’s one I’ll leave alone.

Running back is still a bit of a mess for them with 3 guys still getting carries back there. I remain convinced, as do most people that Aaron Jones is the best guy back there, and he needs 20+ carries, but they keep rolling all three of them out there. Jamaal Williams is by no means awful, and Ty Montgomery proved himself a decent enough back when they were against the wall last season. They are all pretty good in the passing game as well. Picking one to go over or under their yards seems a bit silly so I’ll be giving them all a miss on props. I am going to be sucked in by the 2/1 on Aaron Jones again though, that price for the guy I think is the more goal-line back, especially if they’re in the lead which they should be tonight, is good enough for me.

Davante Adams stepped up in the absence of any other experienced receiver last week with 140 yards and a touchdown, he was touted for the off season as a guy who could step up into the conversation for being elite. I’ll be honest, I’m not that high on him personally but his numbers do suggest he’s a decent player and Rodgers likes him and his line is set about right in the 80s for tonight, 82 on 365 and 88 on PP. I personally don’t want anything on him at evens either. Randall Cobb and Geronimoooooooooo Allison are both questionable for tonight, my thought is that Cobb will miss and Allison will play, unfortunately we won’t know until 1230ish our time, so I’ve got to leave them out. If both go then last weeks rising star Marques Valdez-Scantling (forever known on here going forward as MVS) will be an interesting one to watch, his yards set at 31.5 are tempting, he had 68 and a touchdown and should have had another score in last weeks game, I may well have a nibble on that actually, but again it’s a risk as we won’t know who’s actually playing! Equamineous St. Brown (Forever known as ESB from now) won’t get many touches if either of the established guys go so is off the radar for me. Jimmy Graham is there at tight end, he’s actually not had an awful season so far but just the 1 score. He should have more than that playing with Rodgers but Rodgers doesn’t really target the tight end that often, he’s set around 50 yards tonight which again is about where it should be.

I don’t want to give too much back to the bookies after a successful night last night but I’m fairly confident on these lines.