A frustrating night last night, but nailed the write up on the NAP and it came in just after the first quarter. Austin Hooper got into the endzone against the Cardinals and a couple more of the player props came in, to leave just a 2 pt loss on the night. A lot better than I expected.

I haven’t got much of a lean on tonight to be honest, so I’ll go with a few stats on tonight’s game at Lambeau.

So that’s a short history of the fixture (thanks to packers.com for quite a few of those stats)

These are different teams, of course. The Packers with LaFleur are trying to be more run heavy, with a solid defense and leaving Rodgers with not a lot to do, and when your team is at 4-1 from 5 games to start the season it’s tough to argue with the way they’re doing things.

Will Rodgers have a blow up game? He’s thrown 6 TDs in his 5 games, his best game statistically coming as they tried to come back against the Eagles on TNF a few weeks ago. He will be without his favourite target with Davante Adams missing out again with turf toe. That injury is a bitch for WRs. Jamaal Williams should return to help the run game though which might hurt Aaron Jones who had 4 rushing TDs and 107 yards vs the Cowboys last week. Obviously that’s unsustainable so I’d expect him to drop off especially with competition in the backfield again.

Without Adams the passing game will be… debatable, and the Lions have shown they can shut down talented QBs and WRs by restricting the Chiefs a couple of weeks ago. Geronimo Allison, Marquez Valdes-Scantling, bah. Jimmy Graham will get quite a few targets again, their leading receiver last week was the welshman Aaron Jones. So I think you’ve got to look at Jamaal Williams, although there’s no lines on him which screws that up. 4/1 the best price for him to find the endzone which I’m not a fan of. 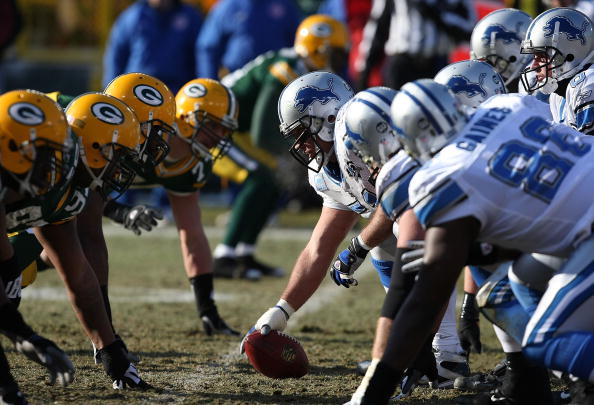 They had their ultimate game-plan against the Chiefs last week, restricting them on offense and running the ball a lot. Kerryon Johnson had 26 carries at just under 5 per go, and a few targets in the passing game as well. Given his ability to catch the ball from the backfield it’s a bit of a surprise he’s only had a max of 2 receptions so far this season. He’s the main man back there and has had more of the ball since CJ Anderson left.

The passing game has been good and Matthew Stafford looks back to his old self after a back injury did for him last season. He’s got a couple of good targets in Marvin Jones and the more talked about Kenny Golladay. Golladay has the scores so far, he’s got at least one in 3 of his 4 games so far with a couple against Chiefs in their last game, he’s definitely had the eye of Stafford too, 9,8,10,9 targets this year. I was tempted with the Marvin Jones receiving line but 62.5 is too high for my liking against this solid Packers defense. It looks like TJ Hockenson will be back for this one after missing a game with concussion caused by falling on his head trying to jump over someone. These guys have got to stop trying to jump people, the defenders are getting used to it happening and increasingly are standing their ground (like the Bengals did to cause a MAndrews fumble yesterday) and they might get injured too like Hock did.

I think defenses will be on top on the whole in this one, 45.5 is a middling line, 3 of 4 Lions games have gone over it, the Packers have topped that line in 3 of 5.

I don’t think I’ve got anything on this one. I’ll more than likely put a little on some RaBs, but seeing as I’m not leaning either side, not sure on the total, on the run of the game. I think I’m out.

Good Luck if you’re on anything tonight.