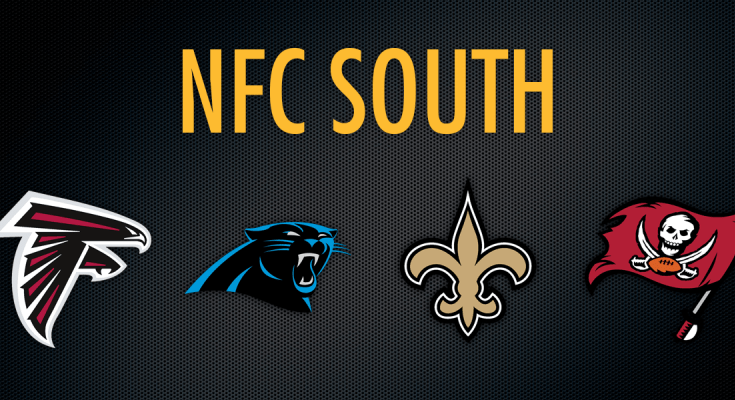 Another really tough division to call, If I supported a team in here I could probably give a fair reason why any of them have a shot at winning it.

Last season was thoroughly ruined due to injuries in their secondary, every week for the first month of the season some of their main defensive players went out for the season, all seem like they should be back healthy for this year meaning that I’m pretty high on the Falcons.

There’s a strange quirk in the scheduling for the Falcons this year, in that 13 of their 16 games are played inside, and the other 3 are likely to be in decent conditions. They play well in domes and obviously it removes the weather factor, so it should be a positive for them.

This team is lead by QB Matt Ryan who has become a very good passer of the ball, he was MVP quality when they made the Superbowl a couple of years ago, with 4944 yards, 38 TDs, 7 INTs, and looking at his stats he wasn’t far off that last year, 4,924, 35 and 7, with a rating above 100 again, and I don’t see any reason he won’t be getting near to that again this year. The team welcomes back Dirk Coetter as OC who worked with Ryan before leaving to join the Buccs as HC, so there should be a good rapport between the two of them.

It always help having the league leader in receiving yards to throw to, Julio Jones is a fantastic receiver. If you wanted to mould a WR then he would looks like Julio, he had a bit of a down season on TDs which you’d expect to rebound a little, although he’s never been too prolific in that aspect in fairness. Last year saw Calvin Ridley had a decent season as a rookie, I don’t think he’ll repeat his TD output but you’d expect him to have a good season again with a full off-season behind him, and then you’ve got Mo Sanu, the greatest QB in the league playing mainly in the slot at a decent level still as well. Austin Hooper threatens to breakout at TE but didn’t do a whole lot last year with 4 TDs, he can expect 4 or 5 targets a week.

The running back position was split between Tevin Coleman and Ito Smith last year after Devonta Freeman was ruled out through injury, but he returns this year and I’m expecting a big year from him at RB, he’s a good pass catcher and a great runner. The MVP year I mentioned earlier for Ryan, and the year before he finished with over 1,000 and 11 TDs in each. I think he’ll be around there again this year. Behind him this season is Ito again, he was adequate last year, and rookie Qadree Ollison who I’ll admit I’ve not heard an awful lot about so far (but had 8-41 and a TD in pre-season week 1), the more experienced Brian Hill is there as well to add further depth.

In truth, I have no reason to believe the Saints won’t win the NFC South again this year other than the fact I like the Falcons. They’ve got a great coach, a good QB, a brilliant RB, and the highest paid WR in the league who had a ridiculous catch percentage last year, and they’ve got a good defense now as well.

Drew Brees has been one of the best in the league during his near 20 years of play, he’s topped 5,000 yards in 4 seasons, one of the few who have managed that feat. The last couple of years have seen his yards fall off, but his completion percentage raise every year for the last 3, setting records in both years. I think that’s how this season will go as well to be honest, 4,000 or so yards, around 70% completion percentage to Kamara and Thomas mainly. The offensive line is one of the best in the league in both pass and run blocking so there’s no worries there.

As mentioned they have the highest paid WR in the league in Michael Thomas who had a crazy 125 catches from 147 targets last year, he caught 85% of his targets, and that’s a lot of targets as well! It’s safe to say he had a good year and I’d imagine he’ll do well again this year. His supporting cast isn’t as stellar as the Falcons, Ted Ginn offers a good deep threat, as does Tre’Quan Smith. Keith Kirkwood and Austin Carr can help out when needed as well. They did however pick up a good TE in Jared Cook, whether they use him well or not is a different thing, they don’t seem to target the TE that much in the redzone in recent memory.

The running back corps had a small change this year with Mark Ingram moving to Baltimore and replaced by Latavius Murray. They’re fairly similar players and it’s fair to assume that Murray will slot straight into the Ingram role in this offense. Either way it’s mainly Alvin Kamara who does the work here, he’s brilliant, both catching out of the backfield and rushing, once he gets in space he’s a very tough man to stop. Last year he finished with nearly 1,600 combined yards and 18 TDs, surprisingly 14 were rushing and just 4 receiving, from 81 receptions.

Their defense is a good unit but the secondary needs to revert back to it’s 2017 form, they actually allowed the 4th most passing yards against them last season, although they were second best in the league against the run.

Their entire season basically depends on the health of Cam Newton after having another shoulder surgery after the season last year. All reports suggest he’s back to where he was pre-injury but has supposedly changed his throwing motion so that he doesn’t put as much strain through that shoulder. It’s almost forgotten that they were 6-2 halfway through the season before the injury took it’s toll.

More on Cam, with All or Nothing we’ve been able to get a little more insight into their season last year, and when he’s on form and full of confidence he’s great to watch. Unsurprisingly he was having a good year and in all honesty didn’t drop off a whole lot with his passing after when they were losing, but his air yards, and rushing attempts dropped off significantly and that’s a big area of his game. Only 28 rush attempts in the final 6 games of the season, he had 28 in the 3 games before that alone.

Christian McCaffery was most of the teams offense last year, proving that he could run between the tackles as well as catching out of the backfield, and finishing with 1,098 and 7 TDs on the ground, as well as leading his team in receiving with 867 and 6 TDs there as well. He also played over 99% of the TOTAL Snaps for the the first 16 weeks (week 17 a few less with the season over) Much like Kamara, he’s a brilliant player to watch with the ball in hand. There’s some backups but they’re not worth mentioning tbh.

Wide receiver is an interesting group this year, both DJ Moore and Curtis Samuel were explosive with the ball especially towards the end of last season. Moore seems to be the WR1 there, he finished last year with 788 and 2, though he didn’t do very well in division. And Samuel is a WR/RB hybrid type, 494 yards and 5 TDs for him, one in particular which makes me prefer him where he cut across the whole field, leaving defensive players in his wake. Outside of those two, they brought in Chris Hogan who once showed he was a decent target, and Torrey Smith is still there as well to add even more speed to the team. Greg Olsen returns at tight end, with Ian Thomas as his backup.

This season could be anything for the Panthers, they have shown they can win the division but it’s such a tough task with the teams around them, and I feel the Falcons and Saints are stronger than them this year.

Every year there’s at least one team who go from worst-to-first. Could it be the Buccs this year? Well, they’ve made changes off the field which should improve them,  bringing in Bruce Arians as the HC, a man who is famously aggressive in his play-calling. In fact historically he plays more 4 WR sets than every other coach in the league and loves to have the ball in the air.

That suits the Buccs well, they actually threw for the most yards in the league last year between Ryan Fitzpatrick and Jameis Winston combined, 5,300+ yards. The big issue for Jameis last year, and in his career has been the lack of ball security, he had 4 multiple interception games from 11 last year. That should be a big focus of his game over the pre-season and something you’d like to think Arians can coach out of him to a certain extent, and I feel it should be noted that he got better in the second half of the season with regards to INTs. Only 3 in his final 6 games of the season and 11 TDs in that span.

He’s got a damn good target in Mike Evans, someone who enjoys the physicality and more often than not comes down with the ball from 50/50 situations. He finished 3rd in rec. yards last year with 1,524 yards, his 5th consecutive season topping 1,000 yard. The WR2 here is Chris Godwin who had somewhat of a breakout year last year with 7 TDs for the season, and he’s someone who is expected to take a further step forward in Arians offense. If we assume that there will be a lot of multiple wide receiver sets then I’ve got to mention Breshad Perriman, Justin Watson and Scott Miller who are the other 3 likely to mix into the team. Apparently Bobo Wilson is a real name too. They’ve got a very good TE duo as well, OJ Howard is expected to step forward this year, and Cameron Brate is always reliable as a redzone threat especially when Jameis is at QB.

The defense on paper looks fairly good as well, they drafted one of the top 2 LBs who is a true sideline to sideline guy, and have a front 7 too.

If things go well and the defense steps up a bit more then they’ll be fine this year.