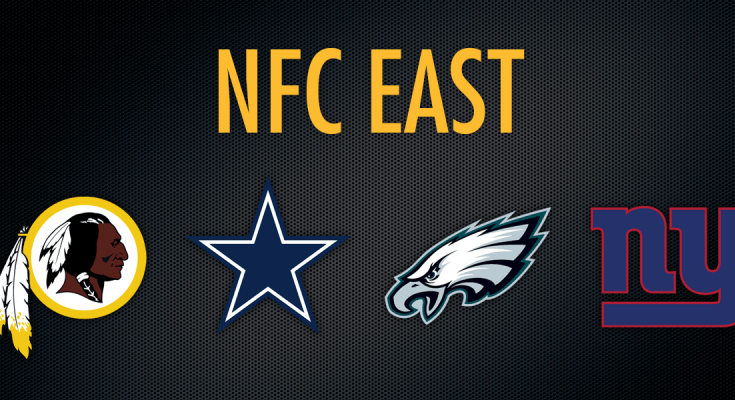 Once again the Eagles had their season hit with injuries on both sides of the ball, Carson Wentz was out for the final 5 games, and they were down to 3rd and 4th stringers in their secondary at times last year, yet they still managed to finish with a winning record on the season, they’ve compiled quite a roster in Phillie and will be hoping everyone can stay fit for once.

Carson Wentz was a shoe-in for the regular season MVP before doing his ACL a couple of seasons back and he looked mobile enough in his 11 games last year, 288 yards per game, 21:7 TD to INT ratio and over 100 rating in his games. He should be back to fitness this year, and I’m trusting that he will because they no longer have BDN backing him up there.

It’s tough to narrow down the top players in the skill positions to be honest. They brought in Jordan Howard from the Bears to add to their many average running backs, heir leading rusher last year just about scraped 500 yards, Josh Adams with 511, he was mixed with Wendell Smallwood, Corey Clement, Darren Sproles, even Jay Ajayi at the start of the year. It seems most likely that Howard will start with the most carries, but be on the lookout for rookie Miles Sanders who they traded up to take and his a pass catching skillset to go with his rushing ability, there’s a possibility that he takes the main role as he’s the first guy that Pederson seems to have hand-picked in the draft for his backfield.

The pass catching group is a little more defined, I’d expect tight end Zach Ertz to lead in targets again, he was 60 ahead of anyone else last year and ever reliable in this offense. Leading the receivers should be Alshon Jeffery who was very good in Wentz’ first season, and the best of the WRs last year, outside of him you’re probably looking at the returning DeSean Jackson to provide a serious threat to defenses, he improves QB stats wherever he goes and despite getting on a bit now I expect him to have a very good year here. Nelson Agholor will be under a bit of pressure from JJ Arcega-Whiteside who has shown well in camp and is proving a good red zone threat to go with the 2nd Tight end Dallas Goedert who is also very good in the final 20 yards or so.

They’ve got a great offensive line, and a good defense as well, overall the Eagles are one of the strongest rosters in the league with a good head coach and a reliable kicker, they’re my pick to win the division, and I’ll probably get them in a few division win accas.

First things first, I am traditionally down on the Cowboys, I have a habit of rebelling against popular teams, too much coverage and things like that, and as “AMERICAS TEAM” the Cowboys are on TV more than anyone else, they get far more media than most teams, and generally just bore me because of it. HOWEVER this year they look like they could have a roster which makes them deserving of the coverage.

I am frequently critical of Dak Prescott, I don’t think he’s a franchise QB and I think it will be hilarious when the Cowboys inevitably make him the highest paid QB in the league, HOWEVER (again) I do appreciate that behind one of the best offensive lines in the league, with one of the best running backs that he can do a decent job, and his mobility helps his appeal, especially in fantasy as you can probably expect 5+ rushing TDs from him this year.

They’ve also given him a fair bit of help in the passing game as well, bringing in Amari Cooper in the second half of last season and Randall Cobb in free agency to go alongside second year Michael Gallup. Tavon Austin is a human being too. Cooper is a frustrating guy to have in fantasy, he is horribly inconsistent, hitting 217 yards and 3 TDs in one game last year (from 10 recs.) and then giving games of 20,31,32,36,58 in his time with the Cowboys, he scored 6 TDs for them, coming from 3 games (interestingly 3 vs PHI and 2 vs WAS in divisional games), but the talent is there and with a former QB as their offensive coordinator now the offense should help Dak find his guys. They also saved Jason Witten from the commentators booth but I don’t think he’ll be of much use, Blake Jarwin is more interesting to me as a TE here.

There’s once again question marks over Ezekiel Elliott, luckily nothing to do with suspensions now, but a contract dispute as running backs around the league carry on their quest for better pay. I personally think he’ll be back in week 1, but there’s a doubt there now. When he plays he’s the best in the league and sneakily had 77 receptions last year, a number which increased after the addition of Cooper from the Raiders. If he doesn’t play then there’s rave reports about the rookie Tony Pollard, so much so that there could be some stand-alone value for him this year, he’s been compared by at least (and probably just) one reporter to Alvin Kamara.

The defense is one of the more surprising points of interest on this team, they’ve improved greatly over the last few years with Jaylon Smith overcoming a hideous injury to prove why he was so highly rated and Leigthon Vander-esch showing last year why he was drafted so highly by the Cowboys, with Sean Lee also one of the best in the league when fit, it’s probably the best LB grouping in the league. With their defensive line very good at getting after the QB as well it’s a very good front, and their secondary isn’t awful either, although is the weaker of the groups on D for the Cowboys. They start the season fairly nicely too, so one to look for in fantasy.

I think they’ll be pushing the Eagles all the way in the division this year, and of the NFC divisions to have 2 playoff teams, I think this will be one of them.

The New York Giants also receive a ton of coverage in the media in the states, which generally isn’t a good thing for them. They were widely criticised for their draft this year, the main gripe being picking Daniel Jones with the 6th pick of the draft when he’d likely have been there at 17 with their second first round pick. But they wanted him and they went after him.

It’s clear for everyone to see that Eli Manning is past it, he doesn’t have the arm strength any more and he wasn’t great last year, although 4,299 yards was good enough for 9th overall, the 21 passing TDs was pretty awful, and his QBR was 25th in the league. So drafting Jones is a clear show that his days are numbered. How numbered is a matter of debate, they originally said that Jones would be sitting all year, but the pressure will mount quickly on them getting Jones involved especially if he carries on having a decent pre-season.

They do however have the main challenger for Zeke as the best RB in the game, Saquon Barkley was electric last year, and showed why he was picked 2nd overall when he joined the Giants. He was pretty much the whole offense for the Giants last year and it seems likely that will be the same story this year with their deficiencies elsewhere on the roster.

After trading away Odell Beckham they’ll be looking to the pass catchers to step up this year, mainly Sterling Shepard and Evan Engram who had good rookie seasons without OBJ playing for most of that season, and they’ve both shown they have the talent to be able to put up numbers. The Giants brought in another slot receiver in Golden Tate, who’s suspended for 4 games, but is very good after the catch when he plays. For the first 4 games it looks like Russell Shepard, Cody Lattimer, or some other average kid will fill out the WR corps. It’s not good.

I don’t have a whole lot more to say about the Giants to be honest. I think they’ll finish 3rd mainly due to them having an elite RB which the Redskins don’t seem to have. Other than that, there’s not a whole lot to be excited about.

The Redskins seem to have taken the mantle of worst run organisation from the Bengals. They make some strange decisions and don’t seem to involve their HC in a lot of them. Medically they’re somewhat of a mess as well. Trent Williams, regarded as one of the best Left tackles in the league has said he won’t play for them again due to some anger over the way they treated him having a brain issue last year. Add to that their backup QB Colt McCoy who they rushed back from a broken leg which required him to have further surgery which he’s still not right from and it’s not a good look for the team.

At QB though they drafted Dwayne Haskins, a 1 year starter in college who looks to have the phsyical attributes to succeed at this level, and they paid Case Keenum a decent amount to be the stop-gap starter for them. Whether Haskins starts week 1 or not will probably depend on how pre-season goes as it’s a pretty close battle either way.

It doesn’t matter that much who starts at QB as they really don’t have a lot of people to throw to, Josh Doctson was a high draft pick who hasn’t shown it, Paul Richardson they paid well but was injured for a lot of last year, Trey Quinn who has had some hype as a talented slot receiver and Jordan Reed at tight end is great when healthy but injury prone. Arguably the worst WR group in the league?

They welcome back Derrius Guice at running back after a serious injury in pre-season ruled him out of his entire rookie year. I like him, he seems like a talented back if they can get him fully healthy again. They went with Adrian Peterson last year and he proved he can still play by topping 1,000 yards once again and they re-signed him so they’ve got a decent couple of guys there. They also still have Chris Thompson on the roster who is electric when healthy but another who just can’t seem to stay fit. They also picked up Bryce Love in the draft who probably won’t play this year but ran for 2,500+ yards in college.

Defensively they have one of the best front 7s in football though, with a lot of youth involved up front with Jonathon Allen and Daron Payne providing pressure. The secondary isn’t bad either, Josh Norman and Landon Collins are two of the highest paid DBs in the league and will have to show their worth and if Rueben Foster gets his personal life sorted they’ve got a hard hitting, quick LB to add to the lot there as well.

Overall I just don’t see the Redskins not finishing bottom of this division, and Jay Gruden is the favourite as the first HC to lose his job which probably isn’t an awful bet.

Bets for the NFC East…

I considered the Redskins to have the most team sacks (11/1), but going up against the Cowboys and Eagles offensive lines for 4 games of the season has put me off that one.