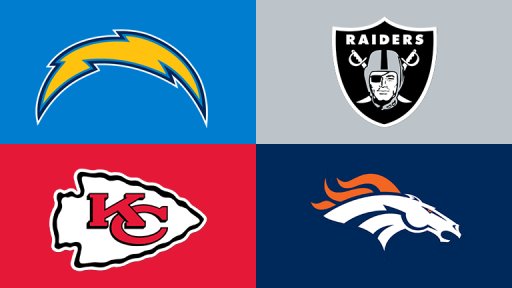 There’s not a lot to say about the Chiefs and in particular Patrick Mahomes which hasn’t been said before, the guy was a phenom last year and with very few changes around him I can’t see that changing too much this year, he may not get 50 TDs again, and i’m sure defensive coaches will be figuring out a way of slowing him down this year, but it’s not that easy to stop someone with the power and creativity that Mahomes showed last year.

I originally had the Chargers winning this division as I assumed the Tyreek Hill would be banned for at least some of the season (I actually thought it would be 8 weeks+) but the NFL decided there wasn’t even evidence to prove who broke his sons arm and he’ll be available (for me anyway) for the whole season, so I’ve got to assume he’ll have another great year for the Chiefs as their main man. They brought in Mecole Hardman in the draft and he’s sparked in pre-season with a similar skillset to Hill, the Chiefs offense on the whole has a crazy amount of pace. Sammy Watkins will likely be the WR2 again, he had some very good games last year, and some awful. Basically the story of his whole career so far. Even the likes of Demarcus Robinson and Byron Pringle had moments of relevance in the team last year, Pringle has been popping in camp by all reports. But the main pass catcher will be TE Travis Kelce who has been going in the first 2 rounds of most fantasy drafts I’ve been in, he finished with 103 receptions last year for 1,336 and 10 TDs. I’d imagine they’ll aim for similar this year too.

Andy Reid has given mixed messages about the running back position, originally saying Damien Williams has the job, then saying it will be a RBBC back there with Carlos Hype, Darwin Thompson and Darrell Williams all mixing in, so I’m not sure what to make of it, Damien Williams looked great at the end of last season both rushing and catching so I’d assume he’ll at least get the bulk of the carries, but he’s unproven with a heavy workload so there’s caution there.

The defense was poor last year leading to the Chiefs having to score a lot, and they’ve lost and gained players, Dee Ford went, and they paid Frank Clark and Tyrann Mathieu to come in, both quality players, so in theory they should be stronger there this year.

So the off-season took a few swerves in this division, the news that Hill will be playing for the Chiefs was juxtaposed with the news that Melvin Gordon wants a new contract and is threatening to not play should he not get one… and they don’t seem to be budging from $10m per year and Gordon wants closer to 15, all a bit of a mess and I think there’s a decent chance he doesn’t show until later in the year (I think he’s got to be back by week 10 for free agency rules or something like that!) The Chargers think they can go into the season with Justin Jackson and Austin Ekeler in the backfield, and while I don’t agree with them, Jackson showed up when required last year and Ekeler has proven he’s a good 3rd down pass catching type.

I do believe the Chargers are nearing the end of their Superbowl window and that Gordon would help them get there so it’s a shame it’s happening like this. The reason I think it’s closing is that Philip Rivers isn’t getting any younger, and while he’s still performing well on, and off the field… The decline may well be pretty fast for him when it hits. They’re also going to have to pay some of their stellar cast of defensive players soon as well.

They’re fairly well off at WR as well, Keenan Allen is one of the most reliable guys in the league when he’s not injured, nearly 100 receptions last year, 1,196 yards is about what you can expect from him most years, opposite him Mike Williams showed what he is in the team for with 10 TDs from 43 receptions, he’s a big red zone threat and now that Tyrell Williams has departed for the Raiders they’ll be hoping he steps up in other areas of the field as well. Travis Benjamin is still there, he provides a good downfield threat with his pace and Rivers likes the big throw. They should hopefully welcome back Hunter Henry at TE, he’s been hampered by injuries but we saw from his rookie year that he should be a key player in this offense, if he plays the full season I think he’ll be nearing double digit TDs.

They are probably the most balanced roster in the league with Joey Bosa and Melvin Ingram right up there as the best pass rush duo there is (the next team might be the main challengers for the best) and a very good secondary as well with Derwin James, who unfortunately is on IR until halfway through the season, Casey Hayward and Desmond King among the best in the league in their positions. As well as bringing in Thomas Davis alongside Denzel Perryman at LB.

What do we make of the Broncos?! It looks to me like they’re going to be one of the best defenses in the league again after bringing in Vic Fanggio from the Bears to be their HC, he was the man behind the Bears D last year and he’s got the players to provide something similar in Denver.

They will have to have a decent defense because their offense doesn’t look like it’s going to be great, in my eyes anyway. I don’t rate Joe Flacco who they brought in from Baltimore, he didn’t do well under pressure last year and the Broncos offensive line will have to improve on last years performance to try and protect him.

If they do then he’s got a few targets to aim for, Emmanuel Sanders seems to be looking good after suffering an Achilles injury last year, it’s not an easy one to come back from but they need him to be the WR1 there otherwise it’s left to second year players Courtland Sutton and Daesean Hamilton to step up. Sutton did a decent enough job as the WR2 last year, a decent average yardage suggests that he did a lot with little. Daesean Hamilton looks like he’ll fill the slot role so should get a lot of targets from Flacco. There’s been a bit of chatter about Juan Winfree in camp, he seems to have been making some impressive plays so could be one to look out for this season. The Tight ends will probably get a lot of attention from Flacco as well, and they picked up Noah Fant quite high in the draft, he and Jeff Heuerman will play a big role in this team.

Running back is complicated for them, last year they drafted Royce Freeman quite high but he got beaten out by Undrafted rookie Philip Lindsay who despite having quite a small frame was electric for them last year, topping 1,000 yeards and 9 TDs, with a very good 5.4 yards average. He just outshone Freeman. I do expect, though, it to be more of a 50/50 split this year and Freeman should have a better year, he faced the most 8 man boxes last year which made it tough for him. They signed Theo Riddick as well which could muddle things even more as a pass catching back.

Last year they added Bradley Chubb to double up on brilliant pass rushers opposite the best in the league at what he does Von Miller, and both had decent seasons, Chubb with 12 sacks, Miller with 14.5. It’s a fearsome look for them and the secondary should get back to where they were a couple of years back, Chris Harris Jnr is one of the best in the league and they brought in Kareem Jackson from Chicago as well.

Despite them having a big homefield advantage, especially early in the season, I just don’t think they’ve got the offense to mount a challenge on the division title when they’re facing the likes of the Chiefs and Chargers.

The team of Hard Knocks with an unsackable head coach. They had an interesting off-season bringing in some… questionable personalities and making some strange moves in the draft, although ultimately they got the players they wanted, just maybe not in the order we all thought they would be. Clelin Ferrell at 4 being the main area of confusion for most, but they needed someone who could get to the QB after the man they gave away last year, Khalil Mack had more sacks alone then the whole of the Raiders did.

They retained Derek Carr at QB despite there seeming to be some friction between him and Gruden last year, and while I’m unsure whether he’ll make it back to the heights of 2 years ago, but he’s at least got a little help in the passing game this year after being thrown to the wolves a little with the talent round him last year, he still topped 4,000 yards with the garbage he was given.

They brought in someone who was described as the best pass catcher in the draft in running back Josh Jacobs and I think he’s going to have a very productive year in Oakland both on the ground and through the air, definitely a guy I’m targeting in PPR drafts. The fact that there’s not a whole lot there other than him, Doug Martin returned and Jalen Richard? I’m happy to suggest Jacobs will be the main man in this backfield.

So about those passing weapons, they brought in the second best WR in the league and while he’s been proving himself to be the prima donna arsehole Bengals fans always knew he was, he’s a bloody good WR and despite having fresh skin on his feet after the old stuff falls off from his “frostbite” incident, I’m sure he’ll be starting week 1 and will be fairly good. WR2 looks like it will be another new recruit in Tyrell Williams who they got in free agency from their divisional rivals, he has a 1,000 yard season in his career and has the pace to do well in any offense, with AB taking the main coverage on the other side I think he’ll have a decent season as well. Guys like Marcel Ateman, Ryan Grant and JJ Nelson will mix in, Nelson is a speedster, and Hunter Renfrow is a rookie who has been getting some chatter. They drafted a couple of tight ends and Darren Waller has been talked about a lot by beat writers and reporters at training camp, in an offense which likes to use the tight end he could be a good late round pick up.

Getting zero pressure on the QB last year hurt the defense, they’ll be hoping Ferrell can do it and second year Maurice Hurst will improve as well. They brought in Vontaze Burfict who will be hoping to re-ignite his career after falling off in Cincinnati over the last couple of seasons, he on-field antics where finally too much to take for the Bengals.

They have a really tough start to the schedule, hosting Denver then KC, Minnesota on the road, at the Colts, then the Bears in London. They could easily go into the bye week at 0-5 and the season over.

Bets for the West.

Now, I know that seems stupid as I’ve got them bottom of the division, but I don’t think their defense will be very good, they scored 290 points last year with hardly any weapons on offense, they’ve added some decent pieces there this year so should be able to put up yards and points.