We only went and had a 7/1 winner on Monday night with Agholar and Reed both getting into the endzone, it was a 1 point stake, but always nice to get a 6 point profit from 3 pts staked!

This is not going to be one to stay up/get up for, 32nd ranked offense takes on the 31st ranked offense. So I’ll be honest, I’ll keep this one short. I should really give this one a miss, but there’s always value to be found no matter how awful the game is going to be.

The Dolphins lost starting QB Jay Cutler with broken ribs last week, with most teams losing your QB would be a disaster, with the Dolphins however it could prove an upgrade. His replacement Matt Moore led them to a win from a 14 point deficit after taking over last week and while he won’t be setting any records, he’s probably a better options than Smokin’ Jay is. He averaged 240 yards per game in the 4 that he started last year including the playoff loss to the Steelers where he took a huge hit but carried on. The worry for this game is that the Ravens have the 7th best pass defence in the league at the moment

His favourite target seems to be Kenny Stills as he’s not afraid to throw down field, and it seems as though their other downfield player Devante Parker will miss the game due to injury, to be honest, even if he is in, I would expect Stills to get more of the action. He’s scored 5 in the last 5 games (including 2 last week) that he has played with Moore under centre averaging 52.5 per game. He’s priced up at 46.5 at 11/10 on 365 for the night. And I’ll be honest at 7/2 I think there’s a decent bet given how much Moore likes him. The usual go-to for the Dolphins is Jarvis Landry in the short game, he was super fired up last week demanding respect from everyone for their current run (13-4 in their last 17 games). I shan’t be giving them that respect. But Landry himself was still used quite a lot by Moore so there’s no reason he won’t get the ball again.

One place the Dolphins should be looking to move the ball is on the ground against the worst rush defence in the league. Ajayi hasn’t scored yet this season, but the Ravens have conceded a lot on the ground, especially recently, and he’s still been getting 20+ carries per game in general. It’s only a matter of time before he finds the end zone. He’s 6/4 anytime and 11/1 to score 2 or more on Skybet. 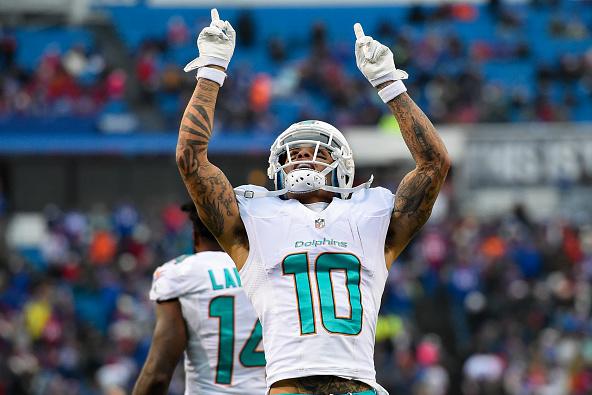 The Ravens. I don’t like the Ravens, I think they’re boring and useless frankly. Flacco is crap, they’re beaten up everywhere in the receiving corps. Jeremy Maclin, Breshard Perriman, Mike Wallace all carrying knocks for tonight and it’s debatable if any will play. Then their backup Michael Campanaro is also questionable for the game. “WR Michael Campanaro (shoulder), WR Chris Matthews (thigh) and LB Tim Williams (thigh) are doubtful Thursday. – Questionable: T. Jefferson, A. Levine, J. Maclin, P. Onwausor, B. Perriman, M. Skura, J. Smith, T. Suggs, M. Wallace, B. Watson, E. Weddle” It’s safe to say it’s been a rough season for them. So… try figuring out who’s going to play from that mess. I would be amazed if Wallace does, he suffered concussion at the weekend and players are rarely allowed to play on a short week.

I have said it before and I’ll say it again, I like Alex Collins in this backfield, but he doesn’t seem to get the goal line carries or catches from the backfield, so he’s limited in his work despite being the better runner. Javorius Allen has equal snaps with him and does seem to be the one who gets most of the work when they get near to scoring.

Ben Watson is probably going to be the most targeted in the passing game for the Ravens, he is on the injury report, but he has been before and has played, so I think he’ll be in. He’s a no bet though. In fairness there’s nothing on the Ravens to bet on.

So what am I looking at here?

Kenny Stills anytime 7/2, Ajayi anytime 6/4, Ajayi 2 or more 11/1. Anything over 9/2 for a team to score a defensive TD is a good price. In this matchup the Ravens are 11/2 and the Dolphins 17/2 for a defensive or special teams score. To be honest though I wouldn’t be shocked to see no TD scorer land at 50/1 such is the lack of offensive talent on display here. Paddypower seems to be best priced on most of tonight’s scorers.

And despite my dislike and lack of respect for both of these teams I’m leaning towards the Dolphins winning on the road on a short week which usually an absolute no-bet. But the Ravens are just so poor I don’t see where their points are coming from. They did turn over teams a lot earlier in the season though, so could help with the D/ST bet.

I don’t want to risk much on this stink fest. So half stakes on these.

Good luck if you’re on anything, I’ll be honest I’m not sure anyone should be on anything here, but they’re expecting it to be so low scoring that there’s good prices around on TD scorers and I couldn’t resist it. I may be an idiot, but oh well.