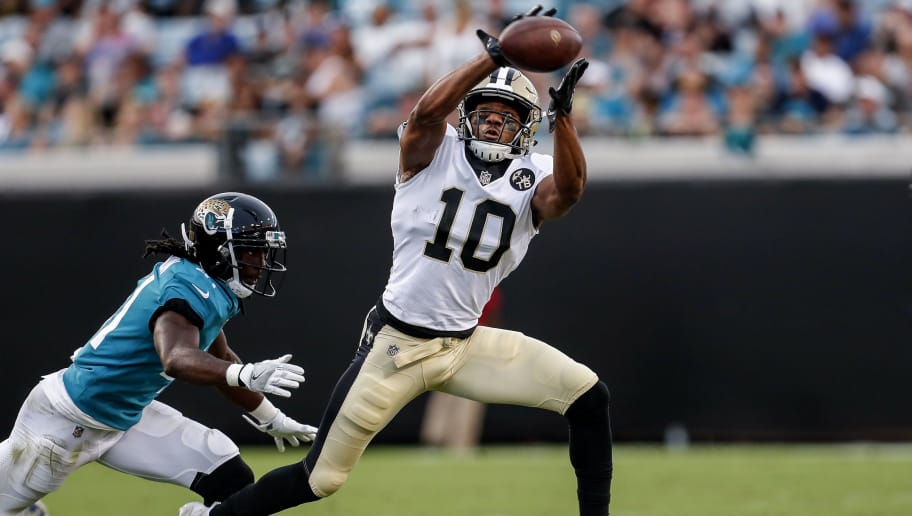 Well, yet another topsy-turvy Sunday night in the NFL, honestly I think from now on you should just look at who won this week and bet against them next week.

I think I better mention my big win before I go any further. I had David Moore anytime at 16s and 2 or more at 500/1 returning a smooooooooth £1,300 from £7.50 and it’s gained me a shit-ton of new followers because of it. My boy Skip on twitter mentioned the David Moore bet to me and I’d heard during the week that they wanted him to get more of the ball in the coming weeks to the detriment of Brandon Marshall. Moore actually only caught 3 passes. Fortunately 2 were for TDs!

The Titans beat the reigning Superbowl champions and looked good doing it in week 4, then they go up to Buffalo and lose to the Bills, with their QB throwing under 100 yards, although Josh Allen once again ran a TD in for them. The Browns won (their first win on a Sunday for nearly 3 years!) beating their AFC North rivals the Ravens. Last week the Ravens were being talked about as a favourite to pressure the Patriots, this week… maybe not. The Chiefs however, are the powerhouse of the conference by the look of it, Mahomes threw the first interceptions of his young career, and only got 1 TD, but their defense stepped up turning over Blake Bortles 5 times for a comfortable win. I had my worries over the Denver game, but didn’t think they’d allow Isaiah Crowell run for the most yards in Jets history to get them an easy win.

The sharps said that the line on the Seahawks was a good one and it proved it with the Rams winning by 2. I thought the Cardinals were a good bet and they pulled through for their first win this season against the 49ers. The Giants finally topped 30 points for the first time in nearly 3 seasons but lost to Gano’s 63 yard free kick as time expired. The Falcons look dead in the water after taking a beating from the Steelers. The Vikings had to win, and they did, Kirk Cousins and his receivers steering them to a close win against the soon to be deposed Champs. The Cowboys lost. As they should, they stink.

Will tonight be a Brees for the Saints or will Daron cause them some Payne?

Drew Brees will become the best passer in NFL history on Monday night, he needs 200 yards to takeover from Peyton Manning at the top of the charts, and he should get it here despite the Redskins being a sneaky good defense. Brees has had an amazing career, there’s only been 9 times a QB has gone over 5,000 yards… Brees has 5 of them! Admittedly that was in general because they had awful defenses, but it’s an amazing career which is still going strong.

They welcome back Mark Ingram this week to help Alvin Kamara in the run game, Kamara has been brilliant by himself, but I think they’ll try and go back to the same split they ran last year, strangely despite having 6 TDs in the 4 games so far he’s only scored in 4 of them. 3 in the first and 3 last week against the Giants. He has, however looked amazing with 275 yards on the ground and 336 through the air so far, the 15 receptions a couple of games back was a freak occurrence that I can’t see happening again any time soon, but impressive non-the-less. I think Ingram returning will help the team as a whole and probably won’t hurt Kamara stats too much.

Michael Thomas has been brilliant this year in the passing game, he’s only missed on 2 of his 44 targets so far this year. That’s ridiculous. Last week was a down week for him as he’d hit double digits receptions in the 3 games before that. The rest of the passing game is a little tougher to call, Ted Ginn will be missing out which should mean more for the bit-part players, Cameron Meredith (3/1 Ladbrokes), Tre’quan Smith (6/1 Spreadex, around 3 everywhere else), possibly even Austin Lee and Tommylee Lewis. Smith is a guy they mentioned a few weeks ago that they wanted to get more involved, they haven’t really done that although he did get open against the Giants last week. Meredith scored a couple of weeks ago, so I figure he’ll probably get a few targets. Tight end Ben Watson has been missed in the end zone for 2 weeks running now, he’s 14/5 on Betfred to score tonight.

Stupidly the 8/13 around on Kamara at William Hill is actually quite good value.

This is a big revenge spot for the Redskins who threw away a big lead for one of the worst collapses of last season.

Alex Smith is a decent enough QB, he has shown the ability to throw downfield if he needs but this Redskins team seems custom made for him to not have to do that and to dink and dunk down the field 6 yards at a time. He only had to complete 12 passes in their week 3 win against the Packers, but that was for 220 yards and 2 TDs! They just dominated that game. He’s also a pretty decent rusher 14,14,20 in their 3 games so far.

The bye week was good for Adrian Peterson (5/4), as he had an ankle injury, worryingly he was still on the during the week, but I’m sure he’ll still go and probably be effective as he seems to be every fortnight at the moment, he’s running like he’s 25 again which is a great sign for the Redskins and he does get to do it behind a very good offensive line. Chris Thompson (2/1) is a great weapon for them to have in the backfield as well, often doesn’t do a whole lot on the ground, but his pass catching and ability in the open field are crucial to this team. He is frustratingly difficult to catch in the right game, but against a Saints team I expect to be leading he should have quite a lot of touches tonight.

The passing game runs through Jordan Reed and Chris Thompson in general but they have targets at WR when needed despite Josh Doctson being listed as questionable for tonight. Paul Richardson (5/2) was signed for big money in the summer and can make contested catches and get down the field, Doctson being possibly limited should help him, Jamison Crowder (12/5) is the usual chain-mover for them, not much of a redzone threat although did score in their last game, supposedly Maurice Harris (10/1) and Michael Floyd (20/1) stand to gain a little work if Doctson is out. The backup Tight end Vernon Davis made a few receptions in their last match as well, he’s a pretty decent play-maker actually and available at 11/1 on PP tonight. Surprisingly to me Crowder and Thompson have the most red zone targets for the team this season both on 3, obviously a small sample size though.

The Redskins defense is currently one of the better units in the league but they’ve yet to really face any challenge, a half fit Rodgers was the most they’ve had to deal with, this will be a whole other kettle of fish tonight.

I’ve got to pick the Saints to win the match, their offense is the best of the 4 units on show tonight, I’m not too sure against the spread to be honest, and the total? I’d lean to the unders, but I wouldn’t bet on it.

Quite like Tre’Quan Smith yards o23.5 on PP as well as him anytime, but it’s a big risk betting on a guy with 1 catch in his short career so far despite the likely increase in looks with the Ginn injury

So there you have it, this will be the first write-up for a lot of you, remember I do this all for free, and frankly the years hasn’t gone well so far so read up, enjoy and hopefully pick some winners!

If you do however want to help me out a little and think you know your football then signing up for a RedzoneSports account helps me, they have an NFL predictor competition which has a £500 free bet as the prize for the top punter each week, well worth entering!